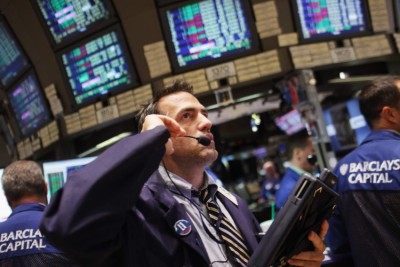 Traders work on the floor of the New York Stock Exchange just before the closing bell on Friday in New York City. Global markets have continued to rise and fall throughout the week as conflicting news emerges about the health of the global economy. Stocks were up nearly 126 points at the end of the trading day trading on the NYSE. Photo: AFP

World stock markets finished a rollercoaster week on a high note Friday, with traders breathing easier but still jittery over the shock waves of slower growth, the US credit downgrade and eurozone debt fears.
One of the most volatile weeks on record saw panic selling, quickly replaced by opportunity buying, and then repeated again; some major stockmarkets plunged more than five percent in one session and then rose more than five percent the next.
At the end, in markets where the sparks to selling originated, in Europe and the United States, net losses were mostly relatively small -- with the exception with Frankfurt's Dax -- while in Asia markets paid more as collateral casualties.
"The pure exhaustion that was this week's market has left participants strained as volatility reigned supreme," said Kimberly DuBord at Briefing.com.
"The prevailing thought on Wall Street ... 'thank goodness it's Friday,'" she said.
For the week, the Dow Jones Industrial Average fell 1.5 percent, the S&P 500 1.7 percent and the Nasdaq 0.96 percent.
In Europe London's FTSE index stood out as a gainer, adding 1.39 percent, but the other markets tumbled: the CAC 40 lost 2.0 percent for the week, and the DAX, 3.8 percent.
In Asia the Nikkei tumbled 3.6 percent for the week, while the Hang Seng Index of Hong Kong gave up 4.3 percent.
The first spark to a huge selloff on Monday was Standard & Poor's controversial, historic downgrade of the US credit rating. That sent US stocks on their second plunge in three days -- after one the previous Thursday -- with an impact that was echoed around the world.
Markets thrashed around on Tuesday as new worries surfaced in Europe over the debt crisis possibly enveloping Italy and Spain, but mostly recovered their losses for the day on assurances from the European Central Bank, and the US Federal Reserve's pledge to keep interest rates ultra-low for two more years because of sagging economic growth.
But the Fed move bared the touchiness of the markets -- the Dow first rose, then plunged, and then rocketed back up on the rate news.
Wednesday more rumors in Europe, including that France might be downgraded in the wake of the United States, sent markets tumbling again; bank stocks were a focus of selloffs in both Europe and the US.
Thursday, the markets shot up again, as European authorities strained to calm the rumor mill while American traders turned their focus back to individual stocks and their valuations.
Finally on Friday, the markets held onto and added to the gains of the day before, helped by a ban of short sales of bank stocks in four European countries and reasonably positive data on consumer spending in the United States.
The turbulence sent investors and businesses fleeing to safe-havens, and gold pushed to a record high Thursday at $1,814.95, before dropping off to around $1,746 late Friday.
Investors also sought out the Japanese yen and Swiss franc, prompting interventions by Japan's and Switzerland's central banks to prevent further rises.
And despite the US downgrade, traders fled into US Treasury bonds, sending yields at one point Wednesday to historic lows. By the end of the week, the US benchmarket bonds were still hovering near their lowest yields ever.
While calm returned on Friday, all the sources of the jitters -- Europe's dubious capacity to get a hold onto its debt problems; Washington's ability to address the debt-and-deficit issues S&P singled out -- remained in the air.
"We've known about both problems for months ... Neither one of these things should have been a surprise," said Nicholas Colas of ConvergEx Group. "What we've learned this week is that anticipating events is not the same as discounting them."
Traders remain on edge, said Gregori Volokhine of Meeschaert New York.
"Swings of 300-400 points are really hard on the nerves of traders, investors, and the market confidence," he said.
He pointed the finger at poor political leadership, in Washington and in Europe, in dealing with economic and fiscal problems, and said next week's mini-summit between France's and Germany's leaders on the eurozone crisis could bring more calm.
"If we have evidence of a strong political will not just to cut deficits but also to battle a slowing economy, that will be better," he said.