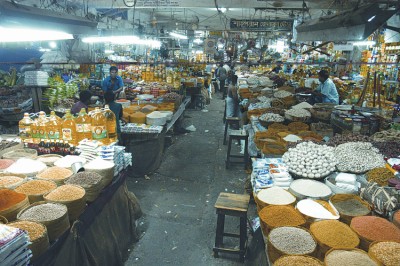 The rate of inflation in Bangladesh has nearly reached double digit level, and food price index has already crossed the double digit level.
This is alarming for the present government. It had promised in the manifesto to keep the price of essentials, especially food price, within reach of the general people. The price of food is a very sensitive issue for Bangladesh since more than 50% of the people spend more than 70% of their expenditure on buying food.
Selim Raihan's exercise showed that in 2005 a 10% increase in food price had actually pushed a large number of people from the margin to below the poverty line. The recent price hike has pushed even a portion of lower middle class people to stand in the OMS line and procure rice at a lower price. This is because of the price difference between OMS and general market has become as high as 40%!
In other words, food price increase results in the fall of real income of the poor and lower middle class people, especially for those who are on the margin of poverty, and thereby increases both the proportion and the depth of poverty.
Sometimes it is argued that food price increase gives incentive to the peasants to grow more food. Or, alternatively, since the cost of food grain production has increased so a minimum remunerative price should be given to the growers of food grain to ensure production.
Last year, the procurement price of paddy was determined at Tk.18 per kg. So rice price must be at least Tk 18x1.50= 27.00, by adding 20% extra margin for profit and transport cost, the total retail price will have to be determined at Tk.33 per kg. But those who earn less than Tk.70 per day cannot buy rice at Tk.35 per kg.
Thus the dilemma for the government is meeting the interests of both the growers and the poor consumers.
One way to solve this dilemma is to provide generous subsidy and introduce more productive technology to reduce the domestic supply price of rice. But that may not work well if our rice market becomes integrated with the global/Indian market. At the current level of input subsidy, the retail price must be at least Tk.33 per kg. And if there is influence of Indian/Thai market, where rice price is still more, then the retail price may be more than that!
In that case the only way to ensure food security for the poor in the short run will be to ensure subsidised supply of food for them through non-market channels. And in the meantime, long term policies should be undertaken to increase the real income of the poor at a faster rate.
The current non-market channels available are: various safety net measures and fair price cards for target groups, rationing for priority groups, OMS operations by the government etc.
The problems with these measures are: They are seasonal or emergency type programmes and have short term effect, they have a high amount of leakages and their coverage is inadequate. Managing food supply in kind is also a huge challenge in terms of maintaining adequate stock, arranging godowns for the stock, supplying them to the poor in time, etc.
Today, on the one hand, markets of food items have become globally integrated but on the other hand, to maintain national food security, the countries have become very cautious about export, especially when there is a universal crisis in production. So every country must build its own buffer stock of food in advance. If private market does that then it may cause hoarding and profiteering. Even in case of domestic production rich peasants with higher staying power can follow the same course.
Thus to protect the food security of the poor, the state must build its food stock in advance and compete effectively with the hoarders in the market. This requires a large public company with fund, autonomy in the use of the fund, large scale storage facility and above all a group of patriotic efficient business cadres equipped with the latest information/communication technology. TCB, if restructured properly can serve that purpose.
To correct the middle-man problem in the domestic market chain, the only way available is formation of cooperatives at both ends, i.e. both producers and consumers.
Then finally comes the last constraint, i.e. the man-made crisis by the so-called syndicate and middle men. This is possible in those commodity markets where the number of suppliers/importers is only a few and when they form a syndicate. This problem can be tackled if the above alternative distribution channel is there to offer a choice to the consumers. If that is not there and government takes administrative measures against the strong players, they may resort to further negative actions and situation may deteriorate further. Thus as long as the government is not ready with its public distribution system, any kind of laws or punitive action will lead to more harm than good.