A Bangladeshi couple pieces it all together in Australia
Arun Devnath 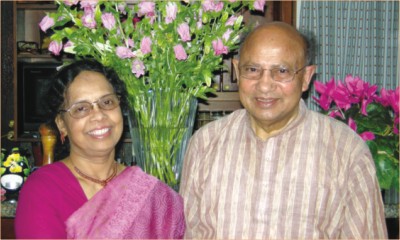 A Bangladeshi couple made a mark in Australia by way of an upmarket textile art. It is the art of making aboriginal fabrics, mastered by Sham Lohani and Momtaj Lohani. It is the art best expressed in patchworks and quilting.
The art has a different side to it: business. Sham did not have any business acumen, no formal training -- apart from a part-time marketing management course. He just did it as if it was his second nature. The path ahead was not smooth, though.
Just after the Vietnam War, Australia slipped into recession. Sham was doing his PhD in chemistry at Melbourne University. New jobs were all but nonexistent in chemistry.
Sham did not have a permanent home in Australia at that time. He started teaching at St Paul's College, obviously for financial reasons. Sham says he enjoyed teaching but hated administration. “Teaching was a new world opened up to me.”
As an alternative to teaching, Sham wanted to branch out into business. In an email interview with The Daily Star, Sham says one of his brothers had book business in Bangladesh, but that was not enough for him to start off in Australia.
“To do business in Australia, you have to be alert to know your business. You have to gather information of your products, your customers, suppliers, competitors,” Sham says. “You have to keep yourself informed thoroughly and analyse the information positively.”
Sham set up Ariadis Pty Ltd through years of perseverance: it now manufactures products, such as T-shirts, bags, women's wear, umbrellas, slippers, neckties and scarves -- all done in aboriginal designs.
“We are planning to bring out a line of saris with our designs,” he says. “We are a sole trader; we are not in partnership with any other company.”
Ariadis trades under different trading divisions: Books 'N' Things (a book business venture), M&S Textiles Australia and Warrina Designs.
Sham started off with a tiny investment -- $87 -- in 1979. Now his company generates about $2 million in combined net profit a year.
Why cotton products?
Patchwork and quilting are an upmarket textile art in hobby industry and popular in the developed countries such as America, Australia, and Canada.
Quilting is done by sewing machine as well as by hand with needles. Quilters prefer to use high-quality soft and colourful 100 percent cotton fabrics for ease to stitch with fine needles. Synthetic materials are not easy to stitch with needles.
In Australia, Sham and Momtaj, fondly called Momo by her husband, launched their business as a horticultural book distributor. They were supplying gardening books to garden centres and other specialist organisations.
“In general, Australians love to read books. On demand we had imported selected books from the US, UK and South Africa. The Australian government does not have any red tape or restriction to import goods into the country,” Sham says.
But things changed in the mid-1980s. The recession in Australia cut into sales of gardening books. As a contingency plan, Sham and Momo picked up craft book distributions, which led them to go into patchwork and quilting books.
“I always love the dynamic nature of business. I keep my eyes open, whenever I see any new opportunity I follow it up. This is challenging and enjoyable,” Sham says.
In early days of patchwork and quilting, only a handful of American fabric manufacturers worked. Some of the supply was not satisfactory, Sham recalls. So the customers were pushing them to go into fabric distribution as well.
“But we had to resist this temptation for a while only because our experience in textiles materials was virtually nil. However, after a while we decided to go into fabric distribution,” he says.
“We get cooperation and encouragement from the government, trade organisations and other sources. Hardly there is any hindrance on your way to do business,” Sham says.
“However, one has to be innovative in business.”
Australia is a country with 22 million people, where competition is fierce. To flourish in business, one must be innovative and intelligent, he says.
“Nowadays you can do most of the things online. These facilities and some others inspire you to do business in Australia for 28/30 years and more. I still remember that nobody in our house (family) ever thought that I could be a businessman.”
A trip down the memory lane is a throwback to his early life in Bangladesh, the birthplace he left in 1968 to pursue higher studies in Melbourne. He was born in Lohani Para of Bagarganj, Rangpur, in 1940.
After doing MSc in chemistry in Rajshahi in 1961, Sham worked briefly for a pharmaceutical company in Dhaka and then joined BCSIR (Bangladesh Council of Scientific Labs and Industrial Research). He was working in the natural product division, particularly on Ram Tulsi (occimum gratissium linn). Sham published four research papers on his work.
While he was doing his PhD at Melbourne University, his wife and their son stayed a world apart -- in Dinajpur in 1971. During the Liberation War, Momo and her son ended up as refugees in India. They came to Australia in October 1971, largely with the help of the Australian government.
“We lost our family homes in Lohani Para during the Liberation War. We eventually stayed back in Melbourne and started from scratch,” Sham says.
“But Bangladesh has always been in my mind ever since I left the country.”
Momo was born in Patuapara, Dinajpur, in 1947. They have one son and three grandchildren.
Footnote: A book, Australian Spirit: Designer projects to Quilt, Fuse and Sew, is edited by S Lohani and Barbara Macey. Momo Lohani contributed two projects in the book. This is the most comprehensive patchwork book on aboriginal fabrics. Momo is also a regular contributor of recipes in a bimonthly Bangla-language newspaper published in Melbourne.