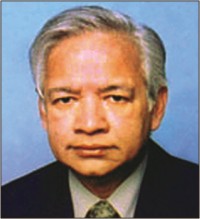 Education and Cultural Affairs Adviser Ayub Quadri yesterday resigned his position in the wake of a huge public outcry over the theft of two Paris-bound Vishnu statues.
He sent the resignation letter to the cabinet secretary in the afternoon, a member of his family told The Daily Star last night.
Addressed to President Iajuddin Ahmed, the letter mentions that he has decided to step down for personal reasons.
Contacted, Syed Fahim Munaim, press secretary to the chief adviser, said that the cabinet division received the resignation letter at around 4:30pm and its secretary straightaway informed Chief Adviser Fakhruddin Ahmed of the developments.
He added that it would be sent to the president today.
The day after the 1,500-year-old relics went missing from the Zia International Airport (ZIA) while awaiting shipment to the French capital, he said he accepts the responsibility. “I don't know if it's my personal failure. But as the adviser of the ministry, I must shoulder the responsibility,” he said speaking at a press conference.
Asked him if he would call it quits, he replied he would have a think about it.
Quadri, who as a career bureaucrat had been in charge of various ministries over the years, is the first adviser to step down since the military-backed caretaker government took over on January 11.
Sources said before tendering resignation he discussed the matter with his colleagues. Though all of them requested him not to give up, he did not change his mind.
In another development, the government has sent a letter to the French Embassy in Dhaka, communicating its decision not to send the remainder of the 145 artefacts.
It regretted that it could not continue with dispatch of the age-old objects that were to be on display at the Guimet Museum in Paris as part of a bilateral agreement. Public sentiment had been the major consideration when making the decision, it added.
Following the Bangladesh government move, the Guimet museum authorities have been considering taking the matter to international arbitration, BBC Bangla Service reported yesterday morning.
Meanwhile, investigation and airfreight sources have said Homebound, the shipping agent hired by France, had declared the artefacts as 'general cargo', leading to the crates being left unattended for three hours on the tarmac and the theft.
The agreement signed between France and Bangladesh says, "The Borrower ensures the security of the artefacts in accordance with the security standards applicable to French Museum. The Borrower guarantees to the Lender that the loaned works are under continuous and vigilant protection."
But Bangladesh Biman, Civil Aviation Authority of Bangladesh (CAAB), Air France, the cultural affairs ministry and French embassy--none had bothered to take special measures to ensure safety of the relics, added the sources.
One of the officials tasked with investigating the art heist said what they have gathered so far suggests that the idols were stolen sometime between Saturday 3:30am and 6:30am. During those three hours, the 13 boxes containing the artefacts were left unattended on the tarmac.
“We wonder how come the theft took place at such a highly restricted area,” said the investigator requesting not to be named.
That there is no roster of the vehicles that entered the cargo village area that night has made things more complicated, added the official.
The Homebound Courier Services paid Air France only $12,486 for the boxes weighing 4,094 kilograms.
“Had they declared the consignment as valuable and asked for extra care they would have been charged 250 percent more,” an airfreight executive said in return for anonymity.
Now if the Homebound demands for the lost goods, Air France would not pay more than $20 for per kilogram, the rate for general goods.
So, for the two statues weighing 64 kilograms the National Museum will get no more than $1,280 dollar that is equivalent to Tk 85,000.