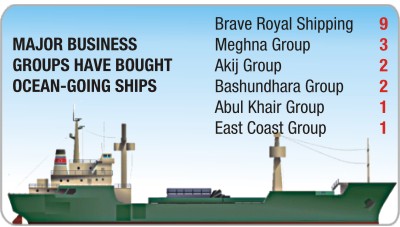 Top business groups bought dozens of ocean-going ships in the last three years to freight their own goods to save transportation costs.
Different conglomerates, including Meghna, Bashundhara, Akij, Abul Khair, East Coast and Brave Royal Shipping, in the last three years bought over 30 such ships, which are called bulk carriers. Other ship purchases are in the pipeline.
“We are planning to buy four more ships to take the tally to five,” said Azam J Chowdhury, chairman of East Coast Group, which has business that range from power-generation to oil refining.
Of the four ships, three will be operating by next month, Chowdhury said. East Coast is buying a crude oil tanker with a 1.2-lakh tonne capacity, which will be the first of its kind in Bangladesh.
“Mainly, we carry our own goods, but often we rent it for others,” said Mostofa Kamal, chairman of Meghna Group of Industries, a $1-billion-turnover company. Meghna has three ships, two of which were bought recently at a cost of Tk 336 crore ($48 million).
These ships carry billets, scraps clinker, slag, iron ore, wheat, sugar, rice and oil etc. across the world. Earlier, foreign ships carried goods for Bangladeshi companies, and it costs importers more. Often, importers had to wait for months for ships.
Akij Group, one of the largest fast-moving consumer-goods companies in Bangladesh, bought two ships -- each costing over Tk 160 crore ($23 million) -- to carry goods for them. Similarly, Abul Khair Group bought one ship recently. Bashundhara Group bought two, each costing nearly Tk 92 crore ($13 million), during the economic meltdown when the price was low, according to the market players.
But the biggest player in the field is Brave Royal Shipping. It owns nine ocean-going vessels, all of which are bulk carriers. Kabir Steel Re-Rolling Mill (KSRM) is its parent company.
Brave Royal Shipping is now in the limelight because Somalian pirates hijacked one of its ships on Sunday.
All the ships are registered in Bangladesh and carry the national flag wherever they go.
“The buying of these large ships by local businesses shows that Bangladesh's economy is growing,” said Chowdhury of East Coast Group.
“We have created employment for high-end people. A captain gets $8,000-9,000 per month,” said Mostofa Kamal.
But the business is not going as smoothly as it seems. In addition to fears of attacks by pirates, buyers of these ships face hassles during registration in Bangladesh.
“The government agency asked us to bring the ship to Bangladesh for registration. It is impossible to bring it here without any cargo,” said Chowdhury.