Necessity of a policy for universities -- both public and private 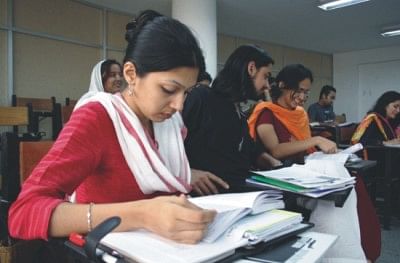 IF unrest, violence and session jam are synonymous with public universities, certificate selling is obviously so with some private universities. This conditional statement may be exaggerated but not absolutely wrong today as far as the general notion of both the categories is concerned.
Almost everyday there is the news of violence/unrest in one or two of the state-run universities. Editorials/ analyses/ letters are written on the issues but solutions seem to be a far cry.
Over the past few weeks or so the issue of private universities has come into limelight because of the government's decision to impose vat on the tuition fees of the students of private universities, and its subsequent withdrawal in the face of protest and violence. Some newspaper articles published on this incident criticised the decision of the finance minister and indirectly applauded the students for their victory.
From my earlier experience as a proctor in a public university I am highly worried about private university students' taking to streets and creating anarchy like the students of public universities. One of the major aspects a private university is proud of is its politics-free and violence-free campus.
I am not against student politics nor do I blame the students solely for their violent activities. But, very shockingly I have noticed that in time of crisis the student leaders and others related to the crisis do not act very responsibly. It is more shocking though that in our country the solution of a crisis comes not from the negotiation table but from actions such as blocking of highways, burning of vehicles and/or from acts of such other violence. Is it a failure of leadership?
I lose hope regarding the improvement of the situation in public universities when I see an efficient vice-chancellor like Professor Abu Yusuf failing to maintain a congenial atmosphere in Chittagong University campus.
Those who read The Daily Star's Point Counter Point page may have noticed some articles appreciating private universities and criticising public universities (by Prof Abdul Bayes, July 7; Prof Mohit Ul Alam, July 29; Dr. Binoy Barman, Aug 6). I certainly agree with the criticism of public universities, but things are not rosy in private universities either.
Just imagine how easy it is to get an A+ from some private universities and how difficult it is from public universities. What a mismatch between the two types of evaluation processes!
I cannot but mention an incident in this regard. One of my acquaintances, who is a computer operator in a coaching centre and whom I happened to meet after several years, requested me to search for a job for him and gave me a CV. I was surprised to learn that he possessed a Bachelor degree in CSE (Computer Science and Engineering).
When I asked him how he achieved the degree, he frankly admitted the technique of getting a certificate from a private university. I also noticed that he himself was highly ashamed to possess such a certificate without virtually knowing anything. This is not a stray incident, there may be more.
Interestingly, some private universities have created a golden opportunity for those people who need a degree, not for any job or for any such practical purpose but to use the titles as ornaments with their names. The first and foremost criterion of getting such degrees is to pay a chunky amount. This is lowering the image of higher education, not only domestically but also internationally.
Universities are autonomous bodies and are usually not interfered with by any outside authority, even the government. A university has its Act, Statute, Syndicate, Academic Council, Academic Rules etc. University authorities are entrusted with the power of conferring degrees. They evaluate their own students' exam scripts and conduct everything in the process of offering degrees.
I am not against private universities. I think it was a good decision of the government to take timely measures to pass the Private University Act (passed in 1992) because it was going to be increasingly difficult for public universities to accommodate the huge number of H.S.C passed students seeking higher education. The Private University Act 1992 paved the way for private universities.
Over time, some of them have grown, but for want of proper care and control some have gone off-track. Who will bring them to the right track? I thank the government because, though late, it has taken some measures to do something by passing the Private University Bill 2010. I appreciate some of the points of this bill and I think that, if implemented properly, it will help in bringing some sort of discipline in private universities.
The universities of a country are the highest seats of learning and research. It is universities that provide guidance by creating leadership in all spheres of life. It is universities that are the repositories of intellectuals who lead the nation to peace and prosperity. But they are not able to maintain their standard because they have some diseases that must be cured, otherwise we will have to suffer a lot.
Just before our victory in the liberation war the anti-liberation forces killed many university teachers to cripple the nation. But now we are a free nation and committed to build "Sonar Bangla." Let the dream of the father of the nation come true. Let our government take an initiative, a plan of action to clear away all the evils that have affected some of our universities. Let us say together: "What is to be aimed that is to be gained."