The ultimate Games of also-rans 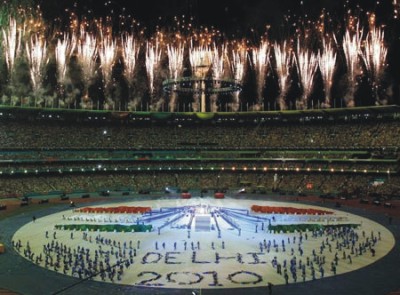 We might all have missed the point about the Commonwealth Games (CWG); the problem is not in the games but in the Commonwealth. Britain took the event seriously when it began life as the Empire Games, for it was a good opportunity to find out how the natives were getting along in approved pursuits. Even the queen is no longer interested in a collection of countries that don't take orders from her, have little in common and less by way of wealth.
Why then should Usain Bolt be interested? There is neither the financial reward of professional engagement, nor the prestige of an Olympics medal. The CWG is the ultimate competition of also-rans. The most versatile athlete at the Games is probably going to be the acrobatic Katrina Kaif, who may not be much good at the 100-metre dash, but is the undoubted star of the 100-metre-wide wriggle and writhe, which will surely be the most interesting event of the two-week tamasha.
The Games were never about sports. They were a fortuitous opportunity for Delhi's ruling class to divert a vast fortune from the national exchequer, in the name of national prestige, and spend it on just those few parts of India's capital where the elite lives. As patriotism, despite its many virtues, is also the last refuge of the scoundrel, a healthy part of the money was siphoned off, evidence of which has begun to move towards the front page.
Trenchant critics like Mani Shankar Aiyar could be falling into a trap when they pray for calamity. (By the way, which would you prefer; a good monsoon or a good CWG?) The oldest PR ploy is to deliberately lower expectations so much that even if the event is halfway average it can be billed as a triumph and all memory of corruption can be washed away in the ensuing gloating and self-congratulation. You have to be seriously stupid if you cannot get a few stadiums in shape after spending Rs.35,000 crore, and we should never underestimate the intelligence of the corrupt.
So expect Delhi to have the Games without a hitch; the weather will have improved; the streets will be light on traffic because locals will be on holiday and tourists absent; athletes will get their feed thanks to last-minute contracts at inflated rates; and a Rs.40 crore balloon, bloated with controversy, will provide adequate laser lighting to Katrina's sultry gyrations. Sports will merely be a boring hyphen between excellent opening and closing ceremonies.
Would David Cameron, prime minister of the premier Commonwealth nation, be caught, dead or alive, at the opening ceremony in Delhi? As his extremely successful visit to India last week proved, he is, sensibly, far more interested in a bilateral relationship with India than a disjointed, multilateral extravaganza, even though Britain is the mother of the Commonwealth. The only flaw was our disconcerting tendency to call Cameron "Cameroon," but this was the hangover from a far more successful sporting event, the football World Cup. We will have mended our ways by the time he drops by again.
The relationship between India and Britain must be one of the more astonishing success stories of history. There is a moving anecdote about an argument between Kasturba and Mahatma Gandhi during their last detention, in Pune, after Gandhi launched the "Quit India" movement in 1942.
Age, and life with a difficult, indomitable husband, had begun to wear "Ba" down. Once, seriously ill, she chided her husband for pitting impoverished Indians against the might of the British Raj. Why, she asked, did Gandhi want the British to quit? India was a vast country, and they should stay, but as brothers, not as rulers. This, replied the Mahatma, was precisely what he had been telling the British.
Kasturba, who did not live to see freedom, would have been pleased this week: Indians and the British have become, almost imperceptibly, brothers. Britain and America are mere partners. Cameron admitted, during his Washington visit, that Britain was the junior partner. There is no seniority in the equal British-India relationship. Scottish jute mills were once the largest employers in India; Tata is now the largest employer in Britain.
There is far more genuine, if latent, sentiment than both countries are loath to admit. While political bonds might be stronger across the Atlantic, India and Britain are united by unnoticed details of cultural contiguity. Cameron would scoff down a curry without a thought, for curry is as British now as Indian.
But look carefully at the photograph of Cameron eating a hot dog, in Mayor Bloomberg's company, in New York; his lower fingers twirl away in implicit disdain of the unfamiliar. Hot dog on Main Street is not Cameron's favourite fast food.
And now that the ranking dove in the Indian cabinet has decided to purchase 57 British Hawks, things can only get better.