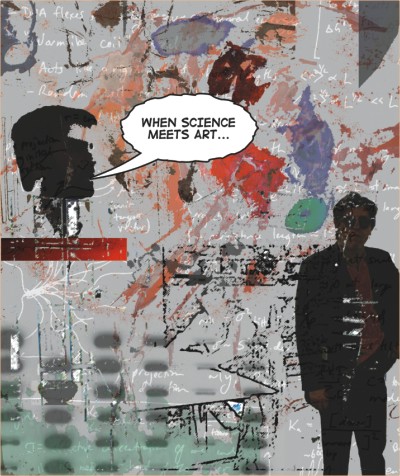 OUR usual concept of 'science' is completely different from that of 'arts'. Thus, a student of arts or literature thinks of science as full of formulae and theories which are difficult to understand. On the other hand, a science student may consider arts as full of unreal thoughts. We often forget that the ideal culmination of science and 'arts' as seen in the stage shows, movies and television programs, play the same roles in the lives of artists and scientists. If one defines art as 'visual expression of one's mind', then a scientist is also an artist. A careful analysis will show that a successful scientist must have an artistic mind and likewise, a successful artist must have knowledge of science to make his/her art appreciated.
The Art of Science - The work of a scientist is usually of practical importance. Whatever we know of science, it is an outcome of highly imaginative mind with the goal of achieving something that has not been known to us. One must 'dream' of any knowledge that is nonexistent in a particular time. Usually such a dream has a purpose of understanding an unexplained phenomenon or of solving a problem that he considers will improve the lot of the mankind or satisfy his curiosity. Once a scientist has such a dream or vision, he then tries to rationalize its practicability. He uses his knowledge of theories or properties of matter (as formulae, math, etc,) to make his dream come true. The result is a piece of work that is 'beautiful' for mind and mankind.
For example, the writer, statesman and inventor Benjamin Franklin first must have had imagined that that lightning and electricity are same. He then went to prove it with his knowledge of conductive nature of electricity. The pianist Alexander Graham Bell, son of a deaf mother, must have had dreamt of sending his voice through wire. He then used his knowledge of the properties of metal in transmitting waves to make his imagination a reality. Many a time, a theory born from a scientist's head may not be proven during his lifetime. For example, some particles called 'Bosons" 'mathematically imagined' almost 90 years ago by the late Dhaka University physicist Satyendra Nath Bose, helped two US scientists win Nobel prize 80 years later by proving their physical existence!
The Science of Art Imagination of an artist although can be very uncertain, it is nonetheless influenced by the particular environment he experiences. When we look at a painting or sculpture and become glued to appreciate the beauty of the work, we forget that the artist used his knowledge of properties of paints, clay and stones to express his mind. A painter must have had a detailed understanding of creating a complex color from mixing the basic ones, and of the suitability of paper, board or cloth to use with ceramic, water or oil paints. These are his knowledge of chemistry and science without complex scientific formulae. A sculptor must have learned or experimented with clay or rock and the tools he used to curve a figure. These are subjects of science technology. A singer must have knowledge of sound effects, and a stage actor must have knowledge of lighting and visual impact to create a successful impression on the audience. These are knowledge of physics. If you had watched the inauguration displays of the last Olympic games in Beijing you can have an appreciation of the friendship of arts and science. Our appreciation of art therefore, is the result of a combination of the imagination of the artist and his knowledge of science.
An artist's imagination may also inspire scientific discoveries and improvements. A nineteenth century artist had a painting showing many delicious foods emerging from pipes out of a petroleum mine. Our dependence on petroleum products today for supplies of food from industries is a testimony to the artist's contribution to the advancement of science. An artist's depiction of spaceships and space stations are not uncommon. Imaginary scientific gadgets in Hollywood movies become a reality several decades later.
Conclusions The creations of artists and scientists both are pieces of art. It is the emphasis of Science or Arts that make them different. There however, is a basic difference. An artist's imagination knows no bound. A scientist's imagination is restricted within the context of available knowledge.