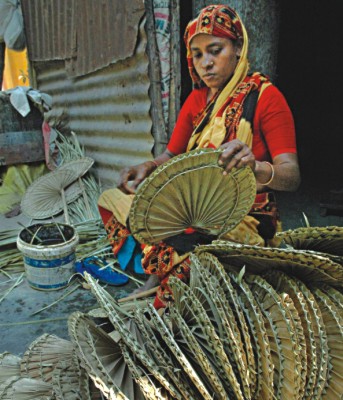 Bangladesh is already known to the world for microfinance that has benefitted the rural poor.Photo: SK Enamul Haq

"A name, term, sign, symbol, or design, or a combination of them, intended to identify the goods or services of one seller or group of sellers and to differentiate them from those of competitors" -- that is how marketing guru Philip Kotler defines “Brand”. In other words, a brand is basically a name used to identify and distinguish a specific product, service, or business.
Nation branding is substantially different from product branding and can be explained in many different ways. Nowadays we hear catchy tag lines used by several nations for promoting tourism in their countries, for example “Malaysia -- Truly Asia”, “Incredible India” and “Amazing Thailand”. However, the function of nation branding is not just limited to tourism. According to Simon Anholt, widely considered as the “Father of Nation Branding”, the concept of nation branding refers to developing an identity for a nation that encompasses several components of national accounts including foreign direct investments, exports, culture, sports, migrants, international relations and many other aspects.
Although the underlying principles are same, there exist differences between branding a product and branding a nation. The traditional promotional tools such as advertising and public relations activities do not apply in the same manner to nation branding. Nations do not give ads in newspapers or distribute promotional leaflets. Instead, nation branding involves a holistic and well-concerted effort to highlight the key competitive advantages offered by the nation. The government has a huge role to play in this regard. It is the duty of our leaders to showcase our achievements to the world. However, this responsibility does not lie on the shoulders of the government alone. It is a responsibility shared by each and everyone of us being citizens of this nation. Each and every member of the civil society and business community are therefore the nation's brand ambassadors.
Moreover, the scope of branding activity and the impact of the same are significantly vaster and far-reaching for nation branding compared to product branding. Whereas, product branding affects a particular company, the impact of nation branding affects our entire economy and hence the standard of living of the citizens concerned. However, there also exists an integral connection between the two concepts. In other words, one can be used for the benefit of the other. Sometimes we get to know a nation through the great companies originated in that country and the product brands they offer. Some of those national brands also build enough equity to graduate to the status of global brands, such as Nokia of Finland, Coca-Cola or McDonald's of the USA and Toyota of Japan. So much so that, we begin to associate these countries with their national brands. Today, India is famous for its well-known brands like Tata or Reliance.
Andreas Markessinis highlighted in his article “Nation brands and national brands: making the most of them” that one of the basic principles of nation branding is that there is often an internal relationship between a nation brand and national brands and both can be worked for mutual benefits. For example, South Korea does not have a great image as a country due to its political turmoil, but the brand equity of South Korean companies like Samsung, Hyundai and LG is much higher than that of the nation brand itself and that has greatly helped to improve the perceived brand image of the country.
As a nation we have to realise that the very concept of nation branding is not only for foreigners, rather, we, the people of the country, are the biggest stakeholders of this concept; without our support and embodiment of the brand identity all nation-branding efforts will be futile. We have to remember that nation branding needs effort, time, dedication and persistence. In most cases it takes years to see results.
Now, the question is in a third world country like Bangladesh on which products should we invest? We are already known to the world for “microfinance”. Today, countries all over the world are reshaping their identities to gain a competitive edge over their neighbours. For example, if we want to brand Bangladesh as a readymade garment exporting country, we must question ourselves as to what extent that would be sustainable in the long run. We must ensure adequate capacity building, improvement in productivity, healthy industrial relations, professional management and new export destinations to remain competitive. We all know that uncertainty is more dangerous than instability. So far our RMG industry has shown remarkable resilience in terms of sustaining the turbulence during 2006 and 2007 when the country was facing political turmoil. Moreover, the sector also seems to have survived the global financial meltdown relatively unscathed. However, uncertainty still shrouds the future of our RMG industry. There is also cloud concentration with regard to future of microfinance industry, vulnerable to slip on a banana skin.
In this age of cutthroat competition, nation branding has become a necessity rather than an option. Long has our country suffered due to negative brand image created by misrepresentation in the media, both at home and abroad. The time has come to rebrand our country -- to highlight the amazing accomplishments of our people despite the hardships. That is what makes our nation truly remarkable and unique. Nation branding is therefore our sacred duty and all of us must answer the call.

The writer is a banker and economic analyst. Views expressed are his own.