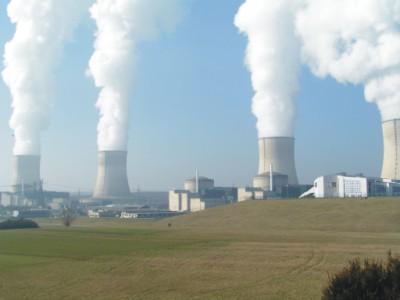 The polluter pays, but the price must be right. Photo: wikimedia

MANY Indian governments have pushed some anti-democratic or unconscionable laws and policies. In 1984-85, Rajiv Gandhi blundered on the Shah Bano case and opened the Babri Masjid's gates to Hindu communalists, eventually catapulting them into power. In 1998, the BJP conducted nuclear tests and tried to rewrite the constitution. The first United Progressive Alliance government sought the US nuclear deal like nirvana -- splitting society, even the nuclear establishment.
Now, UPA-II has embraced its own folly -- the civil liability for nuclear damage bill, which caps nuclear accident liability. The government couldn't introduce the bill in the Lok Sabha because non-UPA parties and its own constituent, Trinamool Congress, opposed it.
It makes no sense to cap the liability for a potentially catastrophic mishap in an accident-prone, highly hazardous industry, whose radioactive fallout can produce cancer and contaminate large areas for centuries.
All 430-odd nuclear reactors worldwide can experience a reactor-core meltdown, like at Chernobyl (Ukraine, 1986). Till 2007, 63 potentially catastrophic nuclear accidents were documented, the including hair-raising loss of coolant accidents (LOCAs).
In a LOCA, the coolant -- usually water, which must continuously draw out heat from the core -- is lost through leaks, evaporation or chemical reaction. Unless the LOCA is contained, the core overheats, and a runaway chain reaction leads to a core meltdown.
Although this probability is low, its consequences are catastrophic -- hundreds of early deaths from burns and acute radiation poisoning, and tens of thousands from cancers over decades; environmental contamination, and poisoning of vegetation and animal life.
The economic damage from Chernobyl, in which an estimated 65,000 people died from cancer, is $250 billion. Should a Chernobyl occur in Germany, the damage, according to an independent expert study, would be $2,400 to 6,000 billion -- equivalent to Germany's GDP.
Capping the liability for such large-scale damage violates two vital safety tenets: the precautionary principle and the polluter pays principle. The first says no activity with inadequately understood hazards should be undertaken. Under the second, those causing damage must compensate the victims.
These principles and the absolute liability notion have been upheld by the supreme court of India in many judgments deriving from Articles 21 (right to life), and 47 and 48A (improving public health and safeguarding the environment ) of the constitution.
In a 1996 case, the Court held: "Once the activity carried on is … potentially hazardous, the person [responsible] is liable to make good the loss … irrespective [of] whether he took reasonable care …". Absolute liability extends to restoring environmental degradation.
The nuclear liability bill violates these principles. It artificially caps total liability for an accident at $ 300 million special drawing rights, or about Rs 2,300 crores and the operator's liability at Rs 500 crores. The difference is to be made up by you and me. This is outrageous.
The bill lets nuclear equipment suppliers and designers off the hook. The notions of strict liability and product liability demand that they pay damages in case the equipment is poorly designed or manufactured. Equally obnoxious is the 10-year limit to liability: many forms of radiation injury, including cancer and genetic damage, reveal themselves only 20 years after exposure.
These flaws stem from two 1960s nuclear conventions meant to promote and subsidise nuclear power when it was seen as safe and "too cheap to meter" and hence deserving of subsidy. But not even a tenth of the projected increase in nuclear power has since materialised.
The US, once the world's leading nuclear-power nation, hasn't ordered a new reactor since 1973. Nuclear power's contribution to global electricity generation is stagnant -- while non-polluting solar and wind energy are growing annually at 20 percent-plus. "Next-generation" fast-breeder reactors, which can conserve uranium by producing more fissile fuel than they consume -- has failed everywhere.
Nuclear power is inherently hazardous, because it involves high-pressure, high-temperature processes and great energy intensity. A nuclear reactor is a complex system, whose sub-systems are tightly coupled. A mishap in one sub-system gets instantly transmitted to others, potentially causing a runaway reaction.
Nuclear power poses the radiation danger at every step -- routinely, even without accidents. The costs of the damage, including treatment, are hard to estimate.
Nuclear power generation generates tonnes of radioactive waste which remains hazardous for thousands of years. Science hasn't found a safe waste storage solution, leave alone disposal method. The costs of long-term storage would be unfairly dumped on society.
India's experience with the 1984 Bhopal disaster has been terrible. Even today, the plant site and nearby water sources remain contaminated with toxic chemicals, including carcinogens. And nuclear materials are more hazardous than chemicals.
That's why developed countries like Germany, Japan, Austria and Sweden impose unlimited liability on the operator, supplier and transporter, etc., and often demand a $3 billion-security deposit.
However, the UPA has latched on to the 1997 convention on supplementary compensation for nuclear damage sponsored by the International Atomic Energy Agency, as if it enjoyed wide acceptance. It isn't actually in force yet -- five states need to ratify it, but only four (Argentina, Morocco, Romania and the US) have.
The IAEA's mandate is to promote nuclear power as safe and economical. It trivialises Chernobyl and only admits to under forms of 5,000 cancers. The CSC follows the Paris-Vienna model and raises total liability per accident to a miserly $986 million.
The sole justification offered for India's nuclear bill is that without a low liability cap, no foreign nuclear operator will invest in India. But Indians don't need nuclear power at the expense of safety or constitutional principles. The Rs 500-crore operator liability (even if raised, according to a new proposal) won't remotely compensate for Indian lives.
The bill represents capitulation to US and Indian corporate pressure, and a retreat from the state's responsibility to protect citizens against hazards. The US, having given India the nuclear deal, is now furiously lobbying to extract nuclear contracts for American corporations. This must stop. The sooner the bill is scrapped, the better for Indian citizens.