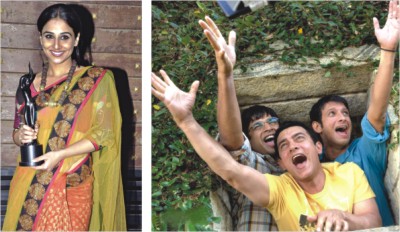 This year's Filmfare Awards saw the best acting prizes going to the lead actors in "Paa", with Amitabh Bachchan and Vidya Balan being named the Best actor and Best actress for their role in the film.
The top grosser "3 Idiots" earned six trophies, including the one for the best film.
The best actress honour went to Vidya Balan for her riveting performance in "Paa" as Auro's mother.
In a witty manner Vidya shot back at the hosts Shahrukh Khan and Saif Ali Khan, who had poked fun at her a couple of years ago for her questionable fashion sense. Shahrukh presented a trophy called the "Naa-real Award" to Vidya.
While accepting her Filmfare Award on the stage, Vidya said, “From nariyal to this Black lady, it's been a great journey at the Filmfare.”
Bachchans skipped the function
Amitabh Bachchan and his family, however, chose to skip the star-studded event as a continuation of their protests against the Mumbai Mirror, the tabloid that published false reports about Aishwarya Rai's health conditions.
A publication that solely belongs to Filmfare, the Mumbai Mirror has been served a legal notice by the Bachchans for refusing to retract their report. The family has also asked the tabloid for an apology.