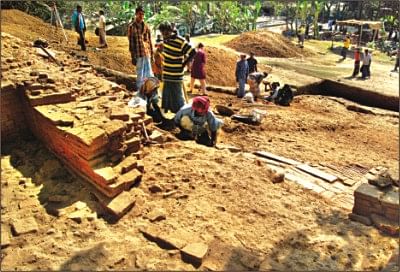 A joint excavation team of France and Bangladesh have discovered an ancient city gate on the southwestern side of Mahasthangarh archaeological site in Bogra. Photo: Star

Archaeologists in Mahasthangarh archaeological site have recently discovered an ancient city gate, used as the city's entrance at least 1,500 years ago.
A joint archaeological excavation team of France and Bangladesh found the ancient city gate on February 1 on the south-western side of the site.
After the discovery, the team claimed that the age of the gate considering the earth and area is at least 1,500 years as they made a similar archaeological discovery at the location last year.
French archaeologist Ernelle Berliet said that several types of stone including sandstones were used along with brick to construct the floor of the gate. The width of the gate was at least 2.95 metres, according to archaeologists.
They however could not give further details at this moment.
Dr Jean-Francois Salles, programme director and team leader of the French team, said that the city entrance was for ordinary use.
“We have found some bronze and iron objects including iron nails during excavation which were used for making door and other purposes,” said Berliet.
Archaeologist Naheed Sultana said, “We found 22 building level in the city area of the ancient site during excavations from 1993.”
The joint team started excavation in mid-January this year in the south part of the city wall to find out more archaeological objects and structures.
A few years ago, a joint team found a mud stove of 400 BC in Mahasthangarh archaeological site during an archaeological excavation, sources said.