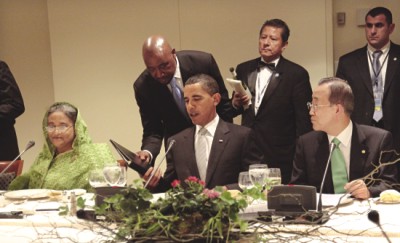 Bangladesh has pledged additional troops to the UN peacekeeping missions as President Barack Obama said Bangladesh blue helmets not only enhanced the prestige of their country but also the honour of the United Nations.
"We're a peace-loving nation and we're committed to global peace…We're helping the UN in doing the peacekeeping job from our own responsibility," Prime Minister Hasina said during a summit meeting on UN peacekeeping hosted by the US president Wednesday afternoon.
Dhaka wants recognition of the Bangladesh Institute of Peace Support Operation as a regional peacekeeping-training institute to train professional peacekeepers from other countries in the region, the PM said.
On the outcome of the meeting, Bangladesh Permanent Representative to the UN AK Abdul Momen told UNB that the prime minister said Bangladesh is committed to sending more troops to the UN peacekeeping mission.
"We're committed to contributing additional forces," Hasina said.
Praising the Bangladesh peacekeepers, the US President Obama said Bangladesh not only enhanced her own prestige but also the prestige of the United Nations through the policing of peace.
Heads of state and government from top peacekeeper-contributing countries, including Bangladesh, Pakistan, Uruguay, Nepal, Italy and Ghana, attended the meeting held in a UN Conference Room on the sidelines of the current 64th UNGA session.
Egypt, China, Jordan, Nigeria, Morocco and Benin--were represented by their foreign ministers at the meeting that lasted over an hour from 12:05pm.
Bangladesh joined the UN peacekeeping mission in 1988 and has sent nearly 82,966 peacekeepers so far. During the period, Bangladesh peacekeepers have served 63 missions when 92 peacekeepers made supreme sacrifices in boots and 106 suffered injuries.
Currently 9,549 army and police personnel are engaged in peacekeeping in 12 countries. The country is now in the second position with 8,082 soldiers and first in terms of police with 1,372 policemen.
"In last 21 years we've shown our professionalism and taken judicious decisions while discharging duties," the PM told the meeting.
She noted that though other peacekeeping countries pulled out their troopers from Somalia and Bosnia due to hostile situation, Bangladesh peacekeepers taking risk of their life performed their duties over there.
Citing the experience in Sierra Leone, Hasina said alongside the peacekeeping operation, Bangladesh troops also did social activities like constructing roads and setting up schools and hospitals.
In a hearty reciprocity, Sierra Leone recognised Bangla as its second language and the president of the Central African Republic visited Dhaka.
The premier said Bangladesh peacekeepers also performed their jobs taking all risks in Congo and Cambodia.
"But there are many challenges-it's no longer a job of peacekeeping but it has become a complex issue. For establishing lasting peace in a country it needs empowerment of women and democratic set-up and social uplift."
She said Bangladesh has got the expertise in social development and establishment of democracy. The country has prepared a digital voter list of 80 million people with photographs, which the country can share with others in their democratic transition.
Expressing his gratitude to the peacekeeping nations, President Obama said, "World benefits from your contribution." He said the UN must improve the strategy of peacekeeping so innocent citizens do not die.
But, he observed, big problem is to maintain overall effectiveness of the peacekeeping operations and evaluate the challenges.
The president said resources must match the mandated commitment of the UN to the peacekeeping mission. He assured increased US resources for the peacekeeping operations.
Obama said the effectiveness of peacekeeping could be improved through Training Equipment Coordination and Consultation.
The US president agreed with Bangladesh PM that the support of the local people is important for establishing sustainable peace in a country.
During the meeting, Italian Prime Minister Berlusconi mentioned the common responsibility of peacekeeping and Pakistan President Asif Ali Zardari reaffirmed Islamabad's commitment to the UN peacekeeping.
The presidents of Ghana and Senegal spoke about the challenges of the future peacekeeping and long-run sustainable peace in the meeting.