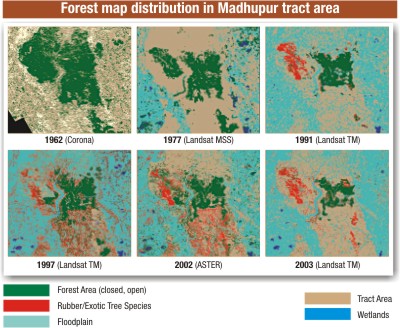 Adoption of wrong policies by the government and corruption by foresters have nearly eaten away the entire Madhupur forest, reducing the unique habitat of flora and fauna down to 8,000 acres from 45,000 acres.
A large variety of wildlife including Royal Bengal Tiger, Asicatic black bear, pea fowls, Samvar and deer used to roam in the Madhupur forest just a few decades ago.
But now the forest has been degenerated and reshaped with commercially planted pineapples and bananas and woods of alien species. Though it once abounded with medicinal plants and tubers, it now hardly produces these species of vegetation anymore.
A comparison of satellite images of 1962 and 2003 clearly shows 85 percent greenery of Madhupur has disappeared in last 40 years. Now noise of vehicles and bombings and shootings of the armed forces overwhelm the chirping of birds.
"The Madhupur forest is valuable in ecological aspects as it's the country's last remaining patches of natural forest. If we cannot conserve this, we'll lose a unique biodiversity system forever," said Dr Tawhidul Islam, one of the eminent forest experts in the country.
Following up the Department of Forest activities, it was learned that the government has never taken up any serious projects to conserve or revive the degraded natural forest. Rather forest officials promoted projects which helped them make quick bucks and destroyed the forest.
The forest department has been implementing donor-funded tree plantation projects in the forestland in different names since 1984. These projects actually encouraged the officials to strip off natural trees and plant alien species including acacia, eucalyptus, goran, gamari and rubber.
The government kept a blind eye when local people also commercially started pineapple and banana orchards in the forest. The government also paid no heed as wooden furniture shops, sawmills, pesticides and hormone shops and brick kilns mushroomed on the encroached forestland.
During this entire process, the state grossly violated the rights of the indigenous people who are traditionally living in the forest for long.
The government owes millions of dollars of soft loans to the Asian Development Bank for projects related to the Madhupur forest, the country's valuable biodiversity resource, which is gradually becoming a waste land.
BANGLADESH FOREST SCENARIO AND MADHUPUR
The official forest coverage of Bangladesh is around 17 percent against 25 percent, the general standard that a country should maintain.
Realising the alarming situation of low forest coverage, the government has set a goal to increase the forest coverage to 25 percent by 2015.
But in reality the coverage has gone down to 7.29 percent (1.08 million hectares) according to an unpublished joint study by Bangladesh Space Research and Remote Sensing Organisation (SPARSO) and the Department of Forest in 2007.
Besides, the 7.29 percent coverage includes the forest of Chittagong Hill Tracts, sal forest, mangrove forest, bamboo or mixed forest and rubber plantation.
The Forestry Sector Master Plan, 1993, under which the government started tree plantation programme, says the annual deforestation rate in Bangladesh is 3 percent.
The Madhupur Sal Forest is a unique example how the government let the foresters steal trees, clear the forest to grow wood plants and let people grab forestland violating the rights of the forest inhabitants.
STUDY ON A VANISHING FOREST
Dr Tawhidul Islam of Jahangirnagar University studied the Madhupur forest during his doctoral thesis in Durham University, UK in 2002-2006 under Commonwealth Scholarship and witnessed sad episodes of deforestation.
Dr Islam analysed a series of satellite images taken in between 1963 to 2003 and detected how the government officials cleared the forest and let others do it.
He mentions in the summary of his thesis that remote sensing techniques have shown quality degradation of the forest, signs of areas cleared for air force firing range and social forestry, conversion of forestland into rubber plantation, evidence of engulfing forests with settlement expansion, and indications of the influence of infrastructure.
His study reveals that more than 85 percent of the Madhupur forest has been cleared in last 40 years. Whatever remains, in most of the areas the age of sal forest is not more than 10 to 15 years.
Within the defined study area in Madhupur the forest coverage reduced from 3,826 hectares in 1962 to 3,573 hectares in 1977, 1,801 hectares in 1997, and only 594 hectares in 2003.
"It is evidenced that the forest department cleared out natural forests to make room for this social forestry programmes, that eventually cause deforestation. In addition, the government plan to convert land use patterns to other land use types impacted on the forest," Dr Islam cites in the summary of his thesis.
Talking with different experts and local people it is known that although severely depleted, the remaining patches of the sal forest still hold a good number of unique birds, reptiles, insects, plants and animals that are found only in a deciduous forest like this.
VIOLATION OF LAWS AND CONVENTIONS
Bangladesh is a signatory to the Convention of Biological Diversity what makes the country responsible to take initiatives to conserve its natural resources.
But the government violated the convention by planting wood trees replacing the natural species.
According to the government statistics, right now 1,000 acres of the Madhupur forestland is being used as firing range, although article 23 (3) (ii) of the Wildlife Protection Act, 1973 prohibits "firing any gun or doing any other act which may interfere with the breeding of any wild animals".
Besides plantation of exotic and commercial species like eucalyptus, acacia, banana, pineapple and so on in the National Park area of the Madhupur forest, ignoring the rights of the indigenous people is clear violation of the provisions of the Forest Act, 1927.