Experts against chemical use 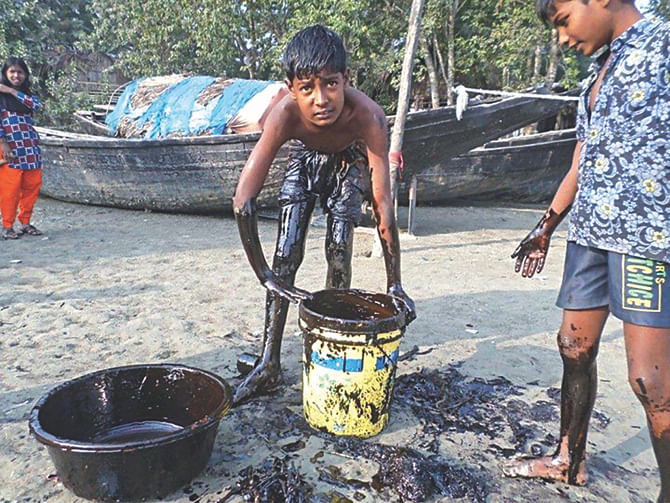 Experts and officials from a joint meeting in Dhaka yesterday suggested not using any chemical for the oil spill clean-up in the two rivers of the Sundarbans.

Some TV channels earlier quoted BIWTA Chairman Shamsuzzoha as saying the salvage ship Kandari-10 would spray an adhesive to increase the density of the oil which will then be swept away by fishing nets.

Masud Hossain, captain of the vessel, said yesterday that they had come from the Chittagong Port to the Shela river with 10,000 litres of liquid chemical called Propylene Glycol Ether.

“We have environmental clearance for using this chemical,” he told The Daily Star on the deck of Kandari-10, claiming to have used it earlier after an oil container sank in the Karnaphuli last year.

In the morning, a team of experts and high officials visited the ship to enquire about the chemical. 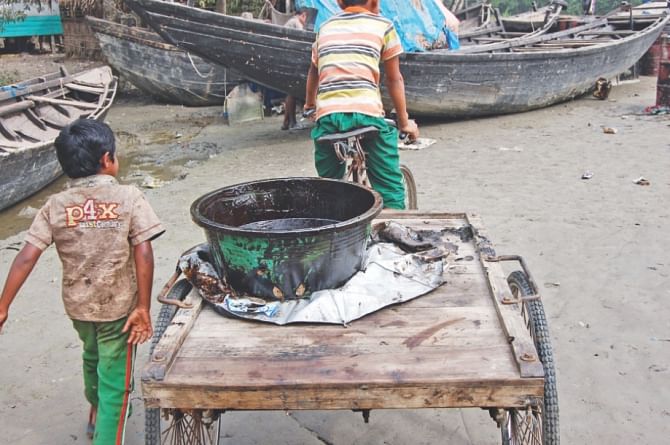 One of the experts, Prof Dilip Dutta of Khulna University environmental science, told this correspondent that it would be better if the disaster could be managed without spraying the chemical.

His view was echoed at the joint meeting participated by Buet experts and top officials from the ministries of environment and forest and shipping.

“We sought technical datasheet of the chemical from the Mongla port authorities,” said a participant of the meeting.

“So we got confused. We need to examine further.”

Also yesterday, Shipping Minister Shajahan Khan told the BBC Bangla that a London-based team officered its assistance for the clean-up. 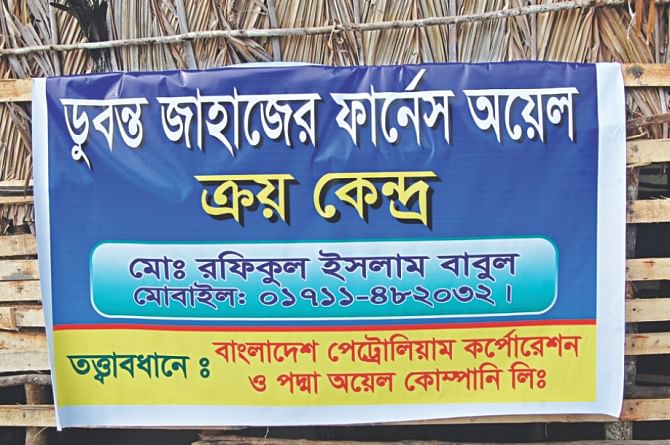 Banner of a centre to buy oil collected by locals. The photos were taken yesterday. Photo: Banglar Chokh/Pinaki Roy

Without going into details, the minister said the team will arrive in the capital by tomorrow and sit with the government officials.

The ministry of environment and forest, meanwhile, decided to examine the water of the Shela collecting samples from 15 points every day.

The slick started on Tuesday morning, after Southern Star-7, carrying 3.58 lakh litres of furnace oil and eight crew members sank near Mongla around 5:00am.  It went down after being hit by a cargo vessel from behind. Seven crews managed to swim ashore.

Four compartments out of six were damaged in the accident, said officials after the salvage of the tanker.

After the spill, only 400 litres of furnace oil was left in the two compartments that survived the accident, said Giasuddin, manager of Harun & Co told The Daily Star yesterday.

Replying to a query, Giasuddin said they had the all the necessary documents, which have been handed over to the government inquiry committee.

After the accident, a few thousand people, mostly fishermen, living along the Pashur and Shela have become worried about their living.

“My livelihood is at stake as I cannot go fishing. So I am collecting furnace oil to sell it to the Padma Oil Company,” said Md Mostakim, a fisherman from Jaymunirgol yesterday, showing a dead crab which apparently died due to the reaction of the oil spillage.

The authorities earlier had asked locals to collect the furnace oil and sell it to the Padma Oil Company agents. People have been advised to use fishing nets, sponges or any other manual means to collect the oil.