Battles in the sky

Shahriar Feroze goes back to the air wars of 1971 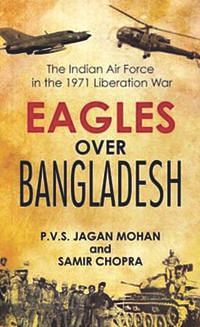 THE book is not only the story of the Indian Air Force's pivotal role and contribution to Bangladesh's war for independence. It is also a short saga based on actual details of two air forces of the subcontinent, one belonging to India and the other to Pakistan. The 1971 war for the Indians may have ended in about two weeks' time but not without the Indian air force emerging as a formidable fighting force that facilitated the Indian army's rapid progress to Dhaka.
But it should be made clear that the open war that broke out between the two arch rivals along the two fronts is not the centre point of the book, aptly titled Eagles Over Bangladesh. With a few, though sporadic, details about the air battles on the western front, the book mainly highlights the role of the Indian air force's Eastern Air Command which had its airfields scattered around West Bengal, Meghalaya and the north eastern states with headquarters in Shillong. During the 1971 war, Eastern Air Command was tasked with offensive air strikes, close support missions and supply operations.
The first two chapters of the book provide an eye-opening intro about the IAF's years between the 1965 and 1971 wars with Pakistan while giving an incisive brief on how the IAF along with its foe the Pakistan Air Force (PAF) had organised their strengths, formed and performed during the years between the wars that even takes the reader back to the post-partition days. The intro is complemented further with a touch-up of historic and dramatic stages, leading Bengalis to fight for their independence with an anecdote of the 'Kilo flight' --- formation of light aircraft --- which were manned and serviced by Bengali pilots and technicians who had defected from the Pakistani Air Force. Thus the path for the Bangladesh Air Force was paved.
It is from the third chapter that the reader starts to get glued to the book with short but live descriptions of initial clashes and dog fights between the PAF and IAF. Knowing full well about the IAF's considerable air might the PAF, armed with a lone F-86 Sabre squadron to defend its skies in the east, was not only helpless but also lacked efficient and courageous leadership. Deployment of only a squadron of F-86 Sabre jets in the East also shows West Pakistan's clear military discrimination towards the East. The PAF, had it so desired, could have utilised its limited air strength to its full capability. Why it did not is still a mystery. However, its pilots displayed courage and efficiency in air-to-air combat during the initial period of the war, till they were neutralised in less than 72 hours after India entered the war.
Among all the battles fought in the air, it is the battle over the skies of Boyra which is perhaps the most evenly fought by the two sides. It was aerial interception combat fought between the two sides well before the Indians had come into the war against Pakistan.
This action took place before thousands of people, became one of the most enduring moments of our Liberation War and made all four Indian pilots instant celebrities in India and Bangladesh. Their pictures, gun camera images of the flaming Sabres and those of the PAF prisoners of war were widely circulated by the media across the world. This engagement marked the first time in six years (after the 1965 war) that aircraft were shot down in air combat in the Indian subcontinent, with the state of increased hostilities in the region culminating in the creation of the Peoples Republic of Bangladesh.
Chapter four provides a vivid account of a few air-to-air battles over the skies of Dhaka. Till the instrument of surrender was signed on December 16 there was only one strategic bombing campaign carried out that's noteworthy and that is the bombing of the then governor's house located near the national stadium.
Other features scattered across the chapters of Eagles Over Bangladesh that needs mentioning are the close cover and air support provided by the IAF, the hundreds of reconnaissance sorties flown by the IAF, the PAF's discriminatory treatment of Bengali pilots, the early days of the Bangladesh Air Force, the committed role of the Pakistani anti-aircraft gunners, repeated bombing of the Tejgaon airport runway and of course the tales of a bunch of brave Indian pilots of a time gone by.
In the end it took about 8 years of pain staking efforts for the two authors to come up with this research based book that provides re-telling and also first-time narrations of air battles held over the skies of Bangladesh. Both the writers also deserve credit for their investigative techniques to communicate with retired IAF and PAF officers besides unearthing new sources of information.
The book is a treasure-trove  prepared over a period of eight years  of painstaking efforts undertaken by the Indian authors P.V.S Jagan Mohan and Samir Chopra. Some of the black and white pictures of the book lead one to nostalgia. On top of everything it is available in Dhaka, within the price range of a thousand taka.