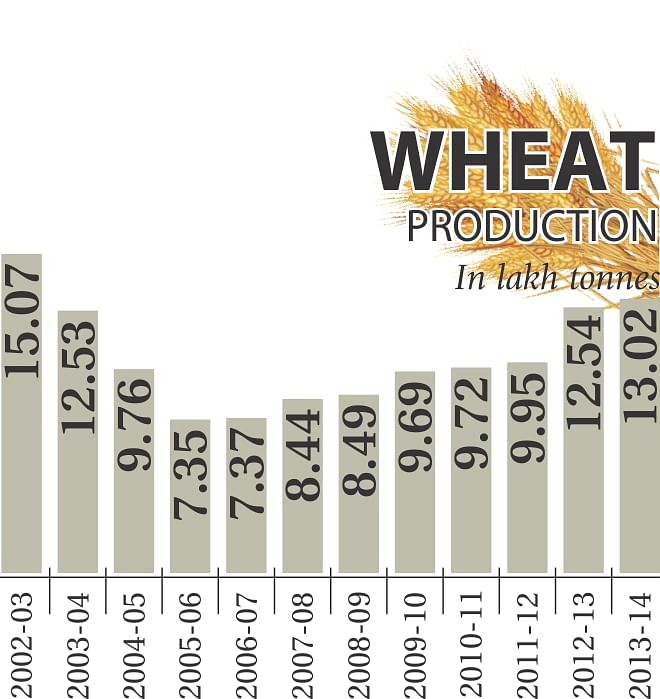 Wheat production rose to 13.02 lakh tonnes in fiscal 2013-14, the highest in 11 years, mainly due to increased acreage and favourable weather.

The amount was 3.82 percent higher than 12.54 lakh tonnes in the previous year, according to provisional estimates by Bangladesh Bureau of Statistics.

Wheat production had hit a record high at 19.08 lakh tonnes in fiscal 1998-99. But later the acreage and production began to fall gradually as many farmers shifted to other winter crops like maize, potato and vegetables that promised higher profits.

Agriculturists said wheat area is rising due to farmers' growing interest in the crop and a shift from boro cultivation.

Lower production cost of wheat compared to irrigation-dependent boro, and less volatile prices compared to rice might have encouraged growers to sow the grain on more of their lands, said Md Rafiqul Islam Mondal, director general of Bari.

A lack of water for irrigation during the dry season in some areas under Barind region is another factor, he said.

The government's purchase of wheat also gave farmers some added incentive. The food office so far bought 1.49 lakh tonnes of wheat at Tk 27 a kilogram from the latest harvest. The price was higher than the government's estimate of production cost at Tk 24.5 per kilogram.

Agriculturists said rising acreage and production might cut Bangladesh's import costs for the grain, the demand for which grows every year owing to rising population, health consciousness and industrial use.

The country needs 40 lakh tonnes of wheat, two-thirds of which are imported every year.

Bangladesh imported 26.89 lakh tonnes of wheat in fiscal 2013-14, up 44 percent from that in the previous year, according to food ministry data.

"Locally grown wheat contains low protein and is not suitable for industrial processing," he said, "Wheat containing high protein is needed for baking."

"Farmers will get higher prices for growing wheat with high levels of protein. It will also reduce our import dependence," he said.

Around eight lakh tonnes of protein-rich wheat are imported annually for industrial processing, he added.