This Probhat Ferry is brought to you by.... | The Daily Star
Skip to main content
বাংলা T

This Probhat Ferry is brought to you by.... 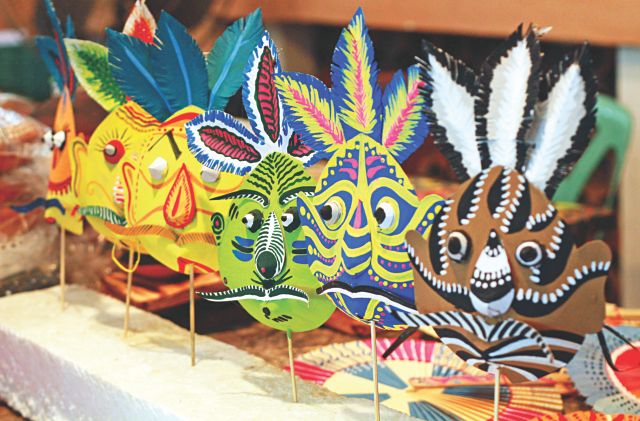 Mokhles Ali couldn't quite put a finger on it, but there was something particularly peculiar about the Pahela Baishakh celebrations this year. Perhaps he had been away from the country for too long, he told himself, as the sound of a pop-rock-electronic-rap rendition of a popular Tagore song blazed through the early morning air, causing him to almost drop his phone in the basin.
Attempting to block out the unpleasant cacophony of sounds, he glanced at the text message sent to him by his service provider: “Dear Subscriber, enjoy a 12 percent discount on all-things-Bengali at American Fried Chicken!”
He put on the red Panjabi, with big bold white Bengali alphabets printed at random, that his sister had given him as a New Year's gift. It was to be worn with “lungi-pants”, the latest designer creation, featuring the traditional lungi, cut and stitched in a modern style. He remembered the heavily-accented designer, saying in a TV interview, “I'm like trying to like protect the Bengali heritage and culture and like give it a twist, make it like more urban and hip”. Her garments factory, she added, was producing the export-quality pants, and selling them at the local market at Tk 3, 200/piece.
He recalled her boasting about the jobs she was creating for the local artisans at her factory.
Thankfully, his sister had not insisted that he wear the lungi-pants.
As he stepped out of his house in Gulshan, he was astonished to see bull-carts lined up on either side of Road 27, offering to take passengers across town. “Sir, ride in true Bengalee style!” cried a nearby cart-puller, dressed in an electric blue T-shirt, featuring the logo of a popular mobile brand.
Before he could answer, a family of five, dressed top-to-bottom in the latest Boishaki style, shrieked in excitement. “Oh how archaic! How adorable,” said a teen, dressed more like a character from a Hindi serial than from a Tagore novel. “Mom, dad! We must take one of these!”
Feeling more and more confused, Mokhles decided to walk. Every five feet, however, he was stopped by one vendor or another, selling the latest mass-produced (manufactured in China, packaged in Malaysia) Bengali snack, fan, drink, crafts etc. He was particularly disturbed to see Coco-cola: coconut water packaged in attractive plastic bottles, in lieu of actual daab at every street. Sold at half the price of the real coconut water, Coco-cola was apparently an instant hit in the South Asian market.
Ting. Another message from his mobile operator: “Open a bHalkhata and manage your accounts online this Nobobarsho.”
Wow, the country was going digital. How very different things were back when he was younger and his shopkeeper father would open his halkhata in the beginning of the New Year and settle old debts. He'd buy him and his sister new kites with the debts he collected. He supposed the digital version, bHalkhata, would automatically send messages to creditors and let them know about their debts! And the kids these days, they probably didn't even know what a kite was – unless, of course, there was a video game called Angry Kites.
His chain of thoughts were broken by his “Esho he Boishakh, esho esho” ring tone. “Mokkhu, won't you join us for breakfast after your Ramna thing is over? We're having a party of sorts, you know, panta-Ilish – I got it catered from the best restaurant in the city, it's like nothing you've ever tasted – and a few cocktails, made with fresh summer fruits,” his cousin, Remy, prattled away.
“Erm, er...” he began.
“Ok, see you then. No time to waste. Must get dressed before the guests arrive...” she hung up.
Mokhles had almost reached Ramna, but the area looked grossly unfamiliar. It seemed to resemble less a park and more one giant billboard, with ads of every conceivable company covering up every available wall, tree trunk and lamp post.
He was beginning to get worried. What was really happening to Bengali culture? Yes, he'd seen the myriad of lifestyle magazines giving detailed advice on how to embody “Bengali-ness” on the given day, departmental stores smartly packaging “muri-murki-kodma” (traditional Bengali snacks) for the urban middle class and beauty parlours giving special discounts on how to make one look the part of the ideal Bengali woman. He'd turned a blind eye to it before, thinking certain things had to be sacrificed for the sake of progress and development. He had said nothing, for instance, when Bangla Link had occupied the Lalon Majar, putting up ugly orange advertisements at the gate and worse still, erecting a hideous building with orange-black stripes. He had been okay when historic grounds of the Ekushey Boi Mela featured the colourful ads of the corporates, or when 'songs of resistance' were compiled by mobile phone companies. He had thought, naively so, that the corporations would protect his culture, heritage and identity from becoming extinct.
But now, he was really worried. Was the Bengali identity increasingly being simplified, packaged and mass produced for widespread consumption by large corporations, often foreign-owned ones?
As he approached the Botomul, his eyes widened in horror. Was that really a huge banner behind the Chayanaut singers, unapologetically, proudly even, proclaiming a long list of sponsors?”

The writer is Reporter at The Daily Star.