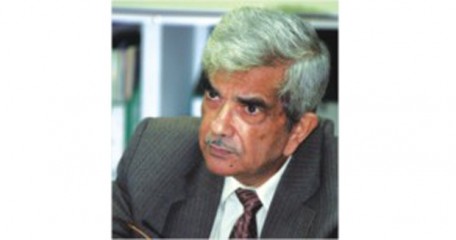 Professor emeritus and the founder director of ‘Research Centre for Mathematical and Physical Science (RCMPS) of Chittagong University, Islam breathed his last at 12:30am at Metropolitan Hospital in Chittagong at the age of 74.

The celebrated physicist and mathematician was admitted to the hospital two days ago with diabetes and other complexities.

He was survived by his wife and two daughters.

Prof Islam’s first namaz-e-janaza will be held at the CU mosque at 11:30am.

The body of the cosmologist will be kept at the Shaheed Minar premises at 4:00pm so that people from all walks of life could pay their tribute to him.

His second namaz-e-janaza will be held at the Shaheed Minar premises around 4:30pm.

The scientists will be buried at Garibullah Shah Mazar premises in the port city on Sunday following his third namaz-e-janaza after Asr prayers.

Prof Abul Mansur Chowdhury, the incumbent director of RCMPS, said the qulkhwani of the noted scientist will be held on March 22 at his at Surson Raod residence in Sabza Zar area of the port city.

He passed the Senior Cambridge and Higher Senior Cambridge exams from Lawrence College in Marit of West Pakistan. He received a BSc degree from St Xavier's College at the University of Calcutta.

He obtained a BA again and an MA from Trinity College in Cambridge.

Prof Jamal obtained his PhD in applied mathematics and theoretical physics from the University of Cambridge in 1968, followed by a DSc in 1982.

Prof Jamal’s worked in the field of ‘Relativity and Cosmology’ and wrote at least nine books including ‘The Ultimate Fate of the Universe’, which has been translated into seven foreign languages.

He has at least 50 researches and publications in the world famous journals.