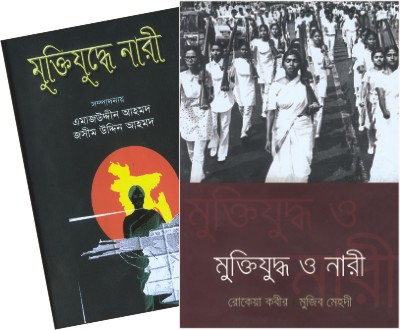 Two former vice-chancellors of Dhaka University and Jahangirnagar University, and a journalist allegedly plagiarised a research work about the contribution of women in the country's liberation war, and published a book titled 'Women in the Liberation War'.
Original researchers Rokeya Kabir, executive director of women's rights organisation Nari Pragati Sangha, and Mujib Mehedi, a researcher and a poet, alleged that Dr Emajuddin Ahmed, former vice-chancellor of Dhaka University, Dr Jasim Uddin, former vice-chancellor of Jahangirnagar University, and Mehedi Hassan Palash, a senior sub-editor of a vernacular daily the Inqilab, plagiarised their research work.
Both vice-chancellors are known as pro-BNP while Jasim Uddin also has the reputation of having considerable affection for Jamaat.
Jasim Uddin was also awarded the highest state honour for excellence, the Ekushey Padak, by the immediate past BNP-Jamaat-led alliance government in 2006, and Dr Emajuddin Ahmed got the award from a BNP government in 1992.
Comparing the two books, The Daily Star found that the plagiarisers not only copied the original research work, but also conveniently dropped sections of the history of liberation war from it.
The Institute for Environment and Development (IED), published the original research work in 2006 under the title 'Muktijuddho O Nari' [Women and the Liberation War] while Asia Publications published the plagiarised version on the occasion of the internationally prestigious annual Ekushey Book Fair in 2008.
The prices of both books were fixed at Tk 200.
The plagiarised version edited by Dr Emajuddin and Dr Jasim Uddin, and 'written' by Mehedi Hassan Palash, claims that the country's liberation was proclaimed on March 27, 1971, while the real history is that it was proclaimed on March 26, 1971, correctly mentioned in the original book.
The plagiarisers also never mention Bangabandhu when they refer to Sheikh Mujibur Rahman, the supreme leader of the liberation war.
It was also found that from page 28 to page 188 of the plagiarised book was copied from the original one, albeit just conveniently dropping some sections. Even the content lists of the two books are the same, while Dr Emajuddin wrote an introduction for the plagiarised version.
Contributions of eminent women citizens like late Dr Nilima Ibrahim and late Jahanara Imam are missing from the plagiarised book, but present in the original one.
In a written statement Nari Pragati Sangha officially said, Bangla Academy under its 'Muktijuddher Dalil O Itihas Bishoyok Grontho Prokash Prokolpo', a project for publishing books on the liberation war, commissioned the original work to the two original authors in 1999.
Later the manuscript was transferred to the Ministry of Liberation Wars Affairs after the Bangla Academy project was suspended.
The researchers finally had to seek the help of IED for publishing the book, as the liberation war ministry also could not publish it due to a lack of fund. IED published the original book in 2006.
When contacted, Dr Emajuddin Ahmed said Abbas Ali Mia, the project director of the liberation war ministry, hired him and Dr Jasimuddin as editors for a project for chronicling the history of liberation war during the BNP-Jamat-led alliance regime.
Abbas Ali gave them the manuscript of the plagiarised book to edit, but did not tell them that it was not actually written by Mehedi Hassan Palash, Emajuddin claimed.
"We published 12 volumes of the history of liberation war. But there was no fund for that specific book. Later I found that Asia Publications published the book, and came to know that Mehedi Hassan Palash was not the actual writer," Emajuddin told The Daily Star adding, "It should be investigated properly."
Emajuddin also wrote an introduction for the plagiarised book without knowing it was already published two years ago, according to his claim.
Mehedi Hassan Palash however said he was contracted by the ministry of liberation war in 2004, and finished 'his work' in 2005.
"They gave me the manuscript and instructed me to change some of its content, which I did and got paid for it. They were not supposed to publish my name," Mehedi added.
He also said it was Dr Emajuddin who gave the plagiarised manuscript to publisher Ismail Hossain Bakul of Asia Publications. Mehedi got Tk 25,000 from the ministry for 'his work', he said.
He also said he already told the publisher to pullout the book from the market.
"The original researchers also worked for money, and the government basically bought the research," he snapped.
"They should not be upset if the government don't publish their names, since it bought the work," he added.
One of the original authors informed The Daily Star late last night that Palash emailed him and apologised.
The original authors are scheduled to make the allegation public today through a news conference.