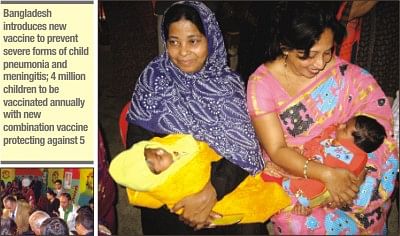 New hope raises with the introduction of Hib pentavalent conjugate vaccine that will protect nearly 4 million children every year in Bangladesh. Two woman, depicting the faces of millions of parents are seen (on right side) with evergreen smile, who brought their babies to immunise on January 15, 2009 in the launching ceremony of the new vaccine in Bangladesh (left side). Photo: Rose Reis

Bangladesh has recently introduced a new combination vaccine that will protect its children against five killer diseases in one injection, including, for the first time, the deadly bacterium Haemophilus influenzae type b (Hib) that causes some severe forms of pneumonia and meningitis.
In a ceremony in Khulna District, southwest of the capital Dhaka, the Minister of Health and Family Welfare, Professor A. F. M. Ruhul Haque, along with other health officials and representatives of UN agencies and development partners administered the first shots of the combination vaccine to Bangladeshi children on January 15, 2009.
Hib is one of the causes of severe pneumonia and meningitis among children. The majority of them are children under five years of age. Even with treatment, thousands of children die of Hib disease every year. Survivors are often permanently disabled—paralysed, deafened or brain damaged.
The vaccine can prevent about one third of life-threatening cases of bacterial pneumonia, the leading infectious cause of death in children worldwide. In Bangladesh, it is estimated that 24% of under-five child deaths is due to pneumonia.
The vaccine will be provided under the routine immunisation programme (EPI) to nearly four million children born in Bangladesh every year. As Bangladesh records high routine immunisation coverage, it is estimated that Hib vaccine can save about 20,000 children's lives annually year.
"This life-saving vaccine represents an important step forward in preventing childhood diseases in Bangladesh", said A. M. M. Nasir Uddin, Secretary of the Ministry of Health and Family Welfare at the launch. "It will greatly help our country to achieve the Millennium Development Goal 4 which aims at reducing under-five mortality."
In South-Asia, Sri Lanka and Pakistan introduced the Hib vaccine in 2008.
The new combination or 5-in-1 vaccine will protect children against Hib and four other deadly diseases: diphtheria, tetanus, pertussis, and hepatitis B. Instead of three different injections (for DPT, Hepatitis B and Hib), children will only need one injection at three different times during their first year of life: at the age of 6 weeks, 10 weeks and 14 weeks.
This will make it easier for health workers who will need less time and less logistics to immunise all children. It will also increase the uptake of vaccine as each child will get all five vaccines at once. At the same time, it will drastically reduce the system loss of the vaccines.
"We are proud to be part of this new initiative by helping with the procurement of the vaccines and supporting the training of about 60,000 health workers together with WHO," said Unicef Deputy Representative in Bangladesh, Dr. Iyorlumun J Uhaa.
The introduction of the 5-in-1 vaccine in Bangladesh is carried out with financial and technical support from the GAVI Alliance (formerly the Global Alliance for Vaccines and Immunisation) and its key partners including Unicef, WHO and the Hib Initiative.
GAVI will spend more than US$95 million for procuring more than 27 million doses for 2009—2010. The Government of Bangladesh will co-finance the purchase by investing US$5.6 million during the same period.
"Vaccines and improvement in health and immunisation systems are much needed in this part of the world," said Dr. Julian Lob-Levyt, Executive Secretary of the GAVI Alliance. "We applaud Bangladesh for taking this important step to help prevent more childhood diseases."
With high poverty, low literacy levels, and limited access to healthcare, many sick children in this densely populated country of 155 million never reach a hospital and often die at home. Vaccines that protect children against preventable high-mortality infections, such as Hib, were urgently needed. Now more children will be saved from early grave.