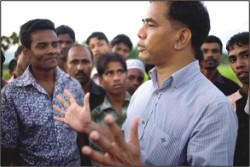 Korom Ali talking to people at Duara in Sunamganj. PHOTO: by SAM Strickland

“Change” he said. “Change is crucial.” As the sun sank in the darkening sky these words, spoken in a quiet voice, seemed poignant and urgent with the state-of-emergency and election looming.
Ayub Korom Ali, an Oxford-educated, Londoni politician, is shifting his career, family-life and home in London to contest the forthcoming election in Sylhet.
He will try to be an Awami League candidate for Sunamganj-5 (Chhatak-Duara) constituency.
He is one of a growing number of Londonis in the wake of 1/11 who feel desperate “to go home and contribute their skills and efforts to their motherland.”
I met Ali during my ongoing project exploring the complex relationship between Sylhet and the UK. It has brought me in contact with countless thoughtful people but also much pessimism and defeatism. Spending time with Ali and listening to his vision, calm optimism and clarity of thought would strike a chord with even the most cynical of journalists.
“The time has come for real change. Not just words, but actually making a genuine difference,” said Ayub Korom Ali.
“Tackling youth unemployment is crucial to future prosperity of the country. Young people are our most valuable asset and we must get them into jobs. That's the only way we can effusively fight poverty.
From before dawn and well into the night, between his endless phone calls, meetings and lively dialogue with local people, Ali talked of his hopes for Chhatak Duara's future and the urgency of change.
He spoke of reform, establishing true and fair democracy, and working towards establishing an incorruptible “economic bridge“ between Britain and Bangladesh. Ali believes his extensive political and local government experience both as a Labour councillor and a senior officer in East London will be pivotal to his success if elected.
“Together we can transform Bangladesh into the 'Sonar Bangla' of which our founding father Bangabandhu dreamt. This is the future our country yearns for.”
Having fought fascist thugs in London in the 1970s and battled for workers' rights as a trade unionist, Ali says he is unafraid to fight for “the prosperous and fair future of Bangladesh.”