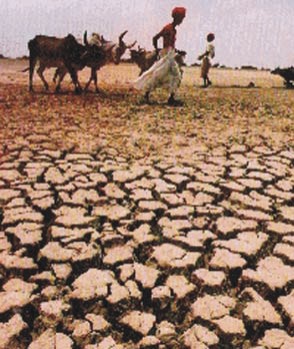 The global climate change is one of the most significant environmental issues of the present world. The problem of this human-induced climate change first came to the attention of the global public and international policy makers when the Intergovernmental Panel on Climate Change (IPCC) published its first assessment report in 1990 (Huq and et.al).
The effects of global climate change are evident now, as we are experiencing through irregular weather conditions. These effects are multidimensional. Among the many effects, scientific evidence has proved that several low-lying countries of the world will be badly affected by climate change, and scientists are predicting that Bangladesh will be among the countries most affected by the change (The Daily Ittefaq, June 22).
The sea level along the Bangladesh coast is rising at about 3 millimeters a year, and the sea surface temperature is also showing a rising trend (Bangladesh National Adaptation Program of Action, 2000). Bangladesh is facing the reality of climate change due to global warming like other parts of the planet.
The climate pattern is altering across the world due to global warming. This will have an impact on the composition of the atmosphere, hydrology, geomorphology, ecology, soil, land use, biological diversity, vegetation etc. The individual impacts on each environmental component also have interactive effects. Environmental components are interrelated, and the world's ecosystems are linked to these components. Therefore, many natural ecosystems will be changed as a result of climate change.
The tropical and subtropical countries will be more vulnerable to the potential impact of global warming through the effects on crops, soils, insects, weeds, and diseases (Bangladesh State of the Environment, 2001). Bangladesh is in the subtropical region. Therefore, the agriculture of this country will be affected. The effects of climate change are already evident in the agro-ecosystem of the country.
Agriculture is strongly interrelated with climatic factors. Temperature, which is one of the main factors of climate, is closely associated with agricultural production. In agriculture, rice production is affected by deviation in temperature. Climate change will increase the temperature, which will bring changes in rice farming activities and affect crops yields.
Various studies indicate that a rise of 10C to 20C, in combination with lower solar radiation, causes sterility in rice spikelets, and high temperature was found to reduce yields of HYVs of aus, aman and boro rice in all study locations and in all seasons in Bangladesh (Bangladesh National Adaptation Program of Action 2000). As temperature has an influence on plants, temperature change will modify rate of pollination and flower blooming, seed distribution, plant growth etc., as a result production of rice, wheat, and maize will decrease.
Climate change will act as a factor for sea level rise in the costal regions of Bangladesh. This will cause an increase in salinity in water and soil in the coastal regions. Growth of standing crops (like rice, jute, sugarcane etc.) will be affected due to soil salinity, and this will limit overall crop production in the costal regions as well as make the soil unsuitable for many potential crops.
The index of aridity will increase during winter under changed climate conditions. As a result, an increased rate of desiccation in topsoil, leading to higher rates of capillary action, will be observed.
It is expected that due to climate change, humidity, wind flow, and temperature in Bangladesh will be changed. These three climatic mechanisms, in changing conditions, cause an increase in insects, pests, diseases and microorganisms in agriculture, and accordingly, crop production will decrease.
The production of potato, brinjal, ladie's finger, tomato, cauliflower, sugarcane, groundnut, ginger, onion, garlic, banana, date, plum etc. will decrease. Increase of diseases, pests and insects will also effect transportation and storage of different crops and vegetable.
Less rainfall during winter due to climate change will lead to a decrease in moisture content of the topsoil, as well as less recharging of the ground water. Higher evaporation will cause drought-like conditions. In summer, increased precipitation will worsen the flood situation, which will have negative effect on agriculture production (Bangladesh State of the Environment, 2001) . Climate change will lead to extreme weather, which will increase the burning or destruction of crops. Due to climate change, occurrence of tornadoes, cyclones and hailstorms will be greater than before. It will hamper the total agriculture production.
Bangladesh is an agro-economy based developing country. There is no doubt that its agriculture will be badly affected by the climate change. Loss in agriculture would increase many social problems, and force the import of food, which will require spending of hard currency.
Therefore, from now on, adaptation and awareness about the impact of climate change in agriculture, and many other sectors, are imperative for the development of Bangladesh. In this respect, the government, the people of Bangladesh, and international bodies will have to work unitedly to face the climate change problem.
Byomkesh Talukder is one of the Faculty Members of Bangladesh Public Administration Training Centre (BPATC), now doing his MSc in Environmental Policy at Graduate School for International Development and Cooperation (IDEC), Hiroshima University, Japan.