Stories of Change: Women tracing a path to live their dreams 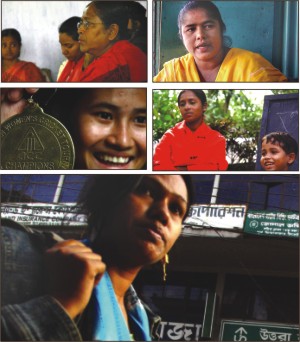 Stories of Change, a 55-minute documentary by young filmmakers Kamar Ahmad Simon and Sara Afreen that portrays the challenging lives of five successful women, was premiered on March 14 at the Russian Cultural centre.
A panel discussion followed the screening where human rights activist Hameeda Hossain, media personality Samia Zaman and filmmaker Tareque Masud discussed several aspects of the documentary. Professor Firdous Azim, of BRAC University was the moderator of the event, which included a brief open discussion for the audience.
Produced by The Pathways of Women's Empowerment Research Programme of Development Studies programme, BRAC University, Stories of Change is an endeavour to present an artistic documentation of the research conducted by the organisation.
Through the five protagonists of the documentary, Stories of Change follows the paths and lanes women have to traverse to live their dreams. Through the camera of Bayezid Kamal, the film travels through Bangladesh; through its hills, rivers and lanes, and through generations, following the narratives of Champa Chakma, Dipaly Goala, Bilkis Akhter Sumi, Kamal Rani Ray and Begum Rokeya, as they meet life's challenge, clear their path and reach their goals. The protagonists were also present at the premier show.
Champa Chakma from Rangamati, the 16 years old spin bowler of Bangladesh National Women's Cricket Team that won the ACC championship in 2007, tells her story in her simple words. How she dreamt to be the most unusual one from her context, and the struggle she had to wage to enlist herself in the national team as a member from the ethnic minorities, comes to the audience in ariveting manner.
In the same way, the documentary move on to the life of Dipaly Goala, the 22 year-old school teacher and field worker who works among the tea labourers of Lakatura tea estate, Sylhet. From a tea labourer's family, Dipaly came out to be a teacher and today dreams that her students will go up to high school one day.
Bilkis Akter Sumi is a pioneer photojournalist from the traditionally conservative Sylhet, confident enough to push her way through the crowds with her camera. Kamala Rani Ray from Sirajganj proves herself equal to a man, maintaining the family jewellery business at Chandaikona Bazaar to look after her sisters after her father's death.
Begum Rokeya (60 years old), the eldest of the five protagonists has travelled through a long way after her marriage broke up and now is a successful social activist engaged in creating opportunities for other women like herself.
“All of the five women put a challenge to the society through their lives. Their individual efforts provide an example to many,” Hameeda Hossain noted.
Samia Zaman said, “The first thing the women have to do is to drop the expectation to be the 'good girl' of society, as we find the protagonists do in the documentary.”
Appreciating the idea of the documentary Tareque Masud said, “The craft of uniting the elements of research with filmmaking, in a way that both are mutually benefited, is really admirable in this documentary. We are looking forward to seeing hundreds of stories instead of five in the future.”
Stories of Change is the debut documentary of Simon and Sara. Bari Siddiqui did background music of the documentary and Sheikh Razibul Islam is the photographer.