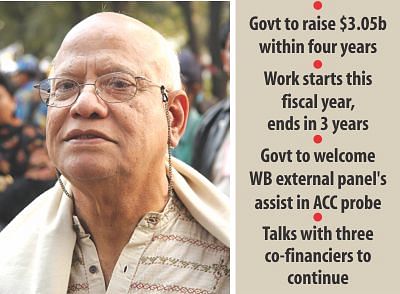 Finance Minister AMA Muhith yesterday told parliament that the government would build the Padma bridge with domestic funds keeping the present design intact. However, talks would continue with the Asian Development Bank (ADB), Japan International Cooperation Agency (Jica) and Islamic Development Bank (IDB) over the project implementation. Dhaka was also maintaining contacts with the World Bank, though the government would not seek loan from the global lender for the project, he said. The government will also welcome if the WB external panel wants to assist the Anti-Corruption Commission probe into the project graft allegations. The minister said existing development partners might like to provide fund for the country's largest infrastructure project in future. China and Malaysia and indirectly India had shown interest in financing the bridge construction, he added, without elaborating their offers or the government position on them. However, the implementation would start in the current fiscal year and will be completed within three years,he told the Jatiya Sangsad. The finance minister's address came four days after the government cancelled its request to the World Bank for the Padma bridge loan. He also disclosed the letters sent to the WB, ADB, Jica and IDB on Thursday to communicate the government's latest stance. â€œThe World Bank press statement [issued the day after the government sent the letter] gives the impression that they have accepted the request.â€ He said the project would cost $3.05 billion (Tk 24,394 crore) and the government would have to arrange the amount within four years. â€œWe want to complete the implementation of the whole project with our own money. For this, we will have to focus first on arranging foreign currency equivalent of $1.8 billion from our own resources.â€ While the minister was delivering his speech, Prime Minister Sheikh Hasina was seated next to him. Muhith said the budgetary allocation made in this FY for the bridge will have to be increased. The estimated budget for the next three years will also have to be drastically changed. In this regard, he went on, initiative had already been taken to change the mid-term budgetary framework prepared by the Finance Division. When the revised budged will be placed in the House, a more detailed plan about the Padma bridge will also be presented. Citing data on gradual increase in budgetary expenditure and revenue earning during this government's tenure, the minister said, â€œIt is not impossible at all for Bangladesh government to implement Padma bridge project with its own resources. â€œI firmly announce in this parliament that we are going to start implementation of the Padma bridge project in the current fiscal year and we will complete it with our own resourcesâ€¦.We are making arrangements so that the implementation becomes a success from engineering viewpoint,â€ he said amid thumping of desks by lawmakers. On the allegation of corruption conspiracy in the project, Muhith said the government had taken into cognizance the allegations raised by the WB and the ACC had been carrying out investigation. â€œWe are determined to look into every aspect of corruption relating to the Padma bridge. â€œThough we have said we won't take the World Bank fund, we have urged the external panel appointed by them to play a role in the investigation by the Anti-Corruption Commission. â€œWe want to assure the nation that no corruption will be tolerated in this project. I warn the corrupt people. You will not be spared,â€ he said.

The minister said, â€œBefore accusing anybody of corruption, there will have to be prima facie evidence. Unsubstantiated evidence and weak proof makes the corruption case ineffective and it foils drive against graft.â€ Muhith added the WB's allegation was about the possibility of graft and it was made on various grounds. Firstly, Bangladesh has a very appalling record of corruption; secondly, contractors are all prone to make complaints, and finally, famous contractors resort to corruption in big projects. Muhith alleged during the tenure of BNP-Jamaat government, corruption was so wide-spread that the World Bank decided not to provide assistance to the Roads and Highways Division. Later, the bank changed the decision. To speak the truth, it decided to finance the Padma bridge project as an experiment, he said. Recalling the four-decade ties with the WB, the finance minister lauded it as the biggest donor in the country's development.

The finance minister on January 31 sent two letters to the World Bank president and the heads of ADB, JICA and IDB -- co-financiers of Padma Bridge project -- after the government decided to withdraw Bangladesh's request for funding the project by the World Bank. The Daily Star has obtained the copies of the two letters. Below are the letters: FINANCE MINISTER'S LETTER TO WB PRESIDENT 31 January 2013 Dear Mr. President, The Padma Bridge has long been the dream project of the people of Bangladesh. We were delighted when two years ago the World Bank joined with JICA and ADB in financing the Project and IDB also came on board. Your predecessor cancelled the funding on grounds of allegations of corruption. With the support of the co-financiers you graciously rescinded the cancellation and agreed to re-engage in the project. We were most appreciative of your decision and we agreed to the terms laid out in the Letter of Understanding and the Terms of Reference of September 20, 2012. The Anti-Corruption Commission has worked with the World Bank appointed panel of legal experts and vigorously pursued the investigations against the persons named in the letter from the WB Integrity Department. A number of actions have been taken and the investigation is proceeding to unearth more evidence to bring against others. The Government of Bangladesh is fully committed to continuing the investigating and punishing all those who are found guilty. We had agreed in September LOU that investigation and implementation of the project would be 'delinked' within one month after satisfactory start of the investigation. It was our hope that we would be able to restart the implementation of the project from where it had stalled about two years ago. It now appears that our timeframe and that of the Bank are not aligned. You are probably aware that this is the last year of the government's current tenure. The construction of the Padma Bridge was a major electoral commitment of our government. We intend to fulfill our commitment to our voters; and in order to do so we must urgently start the implementation immediately, or as soon as practically feasible. In view of our domestic compulsions and the need to commence the construction work immediately we have decided to redesign the project and build it with our own resources. We are grateful to the World Bank for its support but regrettably we cannot delay the project any more and I write to you to say that we are withdrawing our request for funding of the Padma project by the World Bank. We are also writing separately to ADB and JICA to inform them of our decision and, if possible, explore alternative arrangements. Let me make it clear as I have done it so often that the World Bank has been an invaluable partner in the development of Bangladesh over more than half a century. We have a large number of areas in which we are working together and recently it appears that disbursements have picked up speed. We also have a number of new projects under discussion with you. Even though we are disappointed that we have to go forward without the support of the World Bank, I want to reassure you that the investigations of alleged corruption will continue unabated and vigorously. We also very much hope that the World Bank appointed panel of legal experts will continue to assist our ACC in their investigation. I look forward to a fuller discussion when we meet later in the month at your convenience. With warm regards and cordial greetings, Abul Maal A. Muhith Dr. Jim Yong Kim

USA. FINANCE MINISTER'S LETTER TO ADB, JICA, IDB 31 January 2013, Dhaka Dear Mr. President, I have the painful duty of communicating to you our very difficult decision on Padma Bridge project. We seem to be stuck on the Padma project almost indefinitely because of the investigation about the conspiracy of corruption. We have no agreement with the World Bank even on how to process it expeditiously once the Panel clears the way. It seems to be basically a matter of divergent timeframes for project implementation. It has, therefore, been decided to go ahead without the World Bank. We shall strain ourselves to finance the project. I enclose the letter that is being dispatched to the World Bank. In order to reduce cost we are looking at the possibility of redesigning only a road bridge for the present. We have already invested on land acquisition and resettlement and that job is complete. We can also begin the work on approach roads etc. We hope that you will continue to help us with bridge construction and river training. We seek your understanding and help. I hope you will understand that our decision to disengage from the World Bank on Padma was not easily arrived at but necessitated by our compelling timeframe. The inability of the World Bank to delink investigation and implementation was the main impediment. With warm regards and cordial greetings, (Abul Maal A. Muhith) 1. Mr. Haruhiko Kuroda,

Economists and their predictions: What lies beneath the illusion of simplicity?