Rokeya and Sakhawat Memorial School -- One Hundred Years After 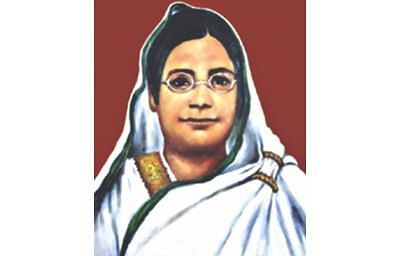 Begum Rokeya Sakhawat Hossain was a social reformer, educationist, prolific writer and campaigner for human rights and gender equality in British India. She was a writer without boundaries. Her words spoke to the world as a whole and often talked passionately on issues that are only now being recognised as vitally important. Her writings, ideas and message are still hugely influential on the life of the people in South Asia today. Unfortunately few people in the West know of Rokeya.
Rokeya was born in British colonial India in 1880 in Pairaband, a village in Rangpur (now in Bangladesh) to an aristocratic Muslim family. Although her father and two brothers had a western education, she and her sisters were denied education. Her elder brother taught her to read and write in the dead of night.
When Rokeya was 18, her brothers helped to arrange her marriage to a friend Syed Sakhawat Hossain, a Deputy Magistrate from Bihar. He was almost 40 years old and a widower. Sakhawat had a progressive attitude and supported Rokeya in her studies. Soon she became a writer.
After about 10 years of a happy married life, Sakhawat Hossain passed away in 1909. Rokeya was always concerned about the lack of education of the Muslim women of her time. Her husband left her ten thousand rupees to help fulfill their shared dream of a school. She opened a school in Bihar with only five girls. Soon she was forced to move to Calcutta (now Kolkata). But Rokeya never gave up. Finally, in 1911 she established Sakhawat Memorial School in Kolkata with eight students and only two benches. The school grew despite difficulties and opposition and now is one of the top rated schools of the region.
Mamlukul Fatema Khanum (my grand-aunt) was the first Bengali teacher of Sakhawat Memorial School. She was a friend and co-worker of Rokeya. At the request of Rokeya, she joined Sakhawat School in 1927. My mother Anwara Bahar Choudhury was a direct student of Rokeya and was also the last principal of the Sakhawat Memorial School in British India (1944-1947).
The School celebrated the one year-long centenary (March 1910-March 1911) and I along with two of my sisters were invited to join the celebrations. I went to Kolkata from Washington, Shaheen Choudhury Westcombe MBE (an architect) went from London and Professor Nasreen Shams joined us from Dhaka. We were touched by the love, affection and respect shown to us, during the centenary of the school. Shaheen had helped earlier in staging a play -- â€œRokeya's Dreamâ€ in London (based on Rokeya's â€œSultana's Dreamâ€, a satire written in English) with the support of Rose Bruford College.
During the centenary celebrations we joined the school parade in the streets of Kolkata along with students, teachers -- both past and present, and guests with placards, photograph and message of Rokeya.
I thought and planned to do a documentary film on Rokeya and Sakhawat Memorial School while participating in the centenary celebrations of this educational institution. The film was completed in March 2012 after two years of hard work and shooting in Pairaband, Rangpur (Rokeya's birth place), Dhaka and Kolkata. The premiere shows were held very successfully in Dhaka and Kolkata in April 2012 with wide media coverage.
I intend to present the documentary in several cities in the West and spread the message of Begum Rokeya Sakhawat Hossain.
We already had a successful screening of this film in the United States. Bangamela 2012 screened this film in Virginia in July during their three- day convention. Bangladesh Mission to the United Nations hosted a show of this film in New York in August 2012. This was followed by two separate shows of the documentary organised by the American Association of Bangladeshi Engineers & Architects (AABEA) and Dhaka University Alumni Forum in Maryland.
Begum Rokeya passed away on December 9, 1932 in Kolkata. She was born on December 9, 1880. Bangla speaking people are celebrating this day in Bangladesh and West Bengal, and paying tributes to this iconic personality. Dhaka University Rokeya Hall is celebrating Rokeya Dibash today and the documentary film â€œRokeya and Sakhawat Memorial School -- One Hundred Years Afterâ€ will be screened at this function. On this occasion, let us all spread the message of the visionary Begum Rokeya.
Iqbal Bahar Choudhury is former Chief of VOA Bangla Service, journalist, TV anchor, elocutionist and filmmaker.