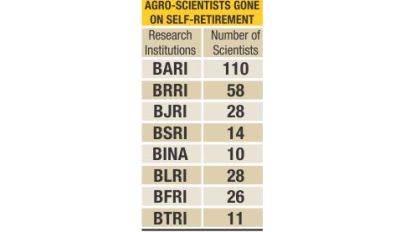 The government is basking in the recent successes in agriculture science at a time when all the 11 agro-research institutions in the country are plagued by brain drain.
Administrators overseeing the National Agricultural Research System (NARS) are worried at agriculture scientists' quitting jobs and going abroad. They attributed this to the government's failure to announce a long-committed special incentive package for the scientists.
Unhappy at poor pay package and other facilities at home, and attracted by greater opportunities abroad, at least 300 scientists went into self-retirement from the public research institutions under NARS over the last one decade while 30 percent more out of a 1600-strong scientists' pool are now fast approaching retirement age, show official statistics.
Officials and scientists at Bangladesh Agricultural Research Council (BARC) said such a massive brain drain has created a shortage of experienced and skilled agriculture scientists in the public sector institutions when there is a growing need for research to innovate and introduce new and improved seeds and farm technologies to combat climate-change fallout and help feed the ever growing population of the country.
BARC is the apex body of NARS under the Ministry of Agriculture and it coordinates activities of the 11 agro-research institutions. These include Bangladesh Agricultural Research Institute (BARI), Bangladesh Rice Research Institute (BRRI), Bangladesh Jute Research Institute (BJRI), Bangladesh Institute of Nuclear Agriculture (BINA), Bangladesh Sugarcane Research Institute (BSRI), Soil Resources Development Institute (SRDI), Bangladesh Fisheries Research Institute (BFRI), Bangladesh Livestock Research Institute (BLRI), Bangladesh Forest Research Institute (BFRI), Bangladesh Tea Research Institute (BTRI) and Bangladesh Sericulture Research and Training Institute (BSRTI).
BARI and BRRI are the biggest losers in the brain drain phenomenon as the two institutions together lost nearly 200 scientists in recent years. They (scientists) preferred voluntary retirement and joined research institutions abroad or universities at home where better pay package and other facilities are available.
Bangladeshi scientists' back-to-back successes in plant and fungi-genomics research in recent years made the government upbeat about the country's capability in advance agro-science. On both the occasions -- jute genome decoding in 2010 and fungi genome decoding in September this year -- Prime Minister Sheikh Hasina informed the nation about the scientific feats by announcing that in parliament.
But, the agro-scientists' morale remains low due to non-implementation of the promised incentives for them, said a top NARS official, preferring anonymity.
They are frustrated by factors such as retirement at the age of 59, promotion policy based on vacant positions, lack of scope for higher studies in modern agriculture, lack of recognition for achievements and absence of pension benefits and recreation leave.
In neighbouring countries India and Nepal, agro-scientists working in public sector retire at the age of 62 and 60 years respectively compared to 58 years for other public servants. In Pakistan, scientists are given special increments in salary if and when they pursue higher education while in service.
Contacted, renowned agro-economist and former head of social science division at the International Rice Research Institute (IRRI) Dr Mahbub Hossain said, "Public research institutions should not deprive themselves from the services of talented agro-scientists just because they reached retirement age. Rather, they should be retained up to a certain age so that the country can benefit from their expertise."
Mahbub, now executive director of Brac that has a huge agro-research resource pool in which many are former public sector scientists, stressed that the government should come up with special incentives for the scientists to stop brain drain.
"We've repeatedly pleaded with the prime minister for incentives for agriculture scientists. But nothing has been done as yet," said Dr Nitish Chandra Debnath, who heads the Krishibid Institution, Bangladesh (KIB).
KIB is one of the oldest and largest professional organisations in the country that represents over 20,000 agriculture graduates.
"It's nothing extra that the country's agro-scientists are asking for, rather, we're asking for the minimum incentives that our counterparts in all neighbouring counties are already getting," said Nitish, also former vice chancellor of Chittagong Veterinary and Animal Science University.
He said brain drain can be stopped if scientists are given in situ promotion (promotion based on expertise and experience, and not on vacancy) as is the practice in public universities. He mentioned that many brilliant scientists in the NARS ended up working in the same positions for years.
Executive Chairman of BARC Dr Wais Kabir told this correspondent that he had forwarded two years ago a draft proposal on how the government could provide incentives to scientists.
Kabir said he thinks the country would lose its science talents if a minimum incentive package is not arranged.
Reached over the phone, Agriculture Minister Matia Chowdhury said the draft proposal was under active consideration but she couldn't give any timeframe when the government would announce the package.
At a reception Prime Minister Sheikh Hasina hosted on June 24, 2010 for the scientists who decoded jute genome, she said, “We will take special measures so that researchers do not face any trouble due to limitation of job tenure and limited salary.”
Ten months later, as this paper enquired in April last year about the progress to that end, the then agriculture secretary CQK Mustaq Ahmed said, “We want to give our scientists a fair deal. So, we are planning to increase benefits and facilities for them. We are doing this for the sake of the nation.”
And on November 23 last year, addressing a city programme the prime minister again said, "We'll have to think how the researchers can be given special facilities including financial support and extension of job tenure.”