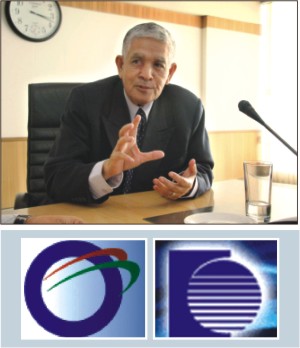 Switzerland-based ICB Financial Group Holdings AG, the new majority owner of Oriental Bank, plans to turn the once scandal-ridden bank into one of the country's biggest, focusing on Shariah-based banking.
Dr Hadenan Bin A Jalil, chairman of the ICB Group, which is listed on the London Stock Exchange, said Bangladesh has huge potential, but it would take five to six years to transform Oriental into one of the best banks in the country.
Hadenan made the comments on the day ICB formally signed a deal to take a 50.10 percent stake at a cost of more than Tk 350 crore (US$51 million). Oriental Bank will be renamed ICB Islamic Bank Limited, according to the new owner.
“ICB is expanding. The company is now targeting emerging Asian economies and we've seen potential in Bangladesh where 85 percent of the 150-million people are Muslim,” Hadenan told The Daily Star in an interview yesterday at Oriental Bank's headquarters at Karwan Bazar in Dhaka.
He said: “We're committed to provide a wide variety of innovative Islamic products and services to fulfil the financial needs of the locals”.
Other potential areas of business the ICB Group has identified are agriculture, services sector and remittance.
“We will pump more into the bank to improve its efficiency and strengthen product base,” said Hadenan, who is also the chairman of Takaful Malaysia, an insurance company.
ICB Group has already deposited the purchase sum with the Bangladesh Bank.
“There will be zero tolerance with inefficiency in the management. Staff of the bank will be given time and training to improve their efficiency,” he said. “No employees will lose job initially as they will be monitored for one year.”
On expansion plans, he said the first one year will be spent for restructuring the bank, aiming to provide improved services to the clients. Infrastructure, especially information technology will be heightened to international standard.
“More emphasis will be given to electronic banking, including ATMs,” he added.
New branches will come up, but the number will not cross 50, he said. Currently, the bank has 30 branches across the country.
The bank will ensure good governance, transparency and accountability. “We'll provide a benchmark for other banks to follow,” he added.
On the higher interest rate charged by banks in Bangladesh, Hadenan said: “An efficient management can cut the lending rate”.
The new owner of the bank said initially the bank's board will consist of as little as five or six members. Of them, one or two will be nominated from Bangladesh and three/four from foreign countries.
The Bangladesh Bank in June 2006 dissolved Oriental Bank's board of directors after detecting massive corruption. To safeguard the interest of the depositors, the central bank took over its full control and appointed a BB executive director as the bank's administrator.
In August 2007, BB floated a tender to sell the bank's majority shares. Two bidders participated in the tender and Swiss ICB Group won the bid as it offered higher price than that of Domestic Consortium.
Private sector, BB and Islamic Development Bank own the remaining shares.
ICB Group has banking business in some 13 countries in Africa and Asia.
Managing Director of Oriental Bank Asaduzzaman said the paid-up capital of the bank is over Tk 700 crore of which Tk 351 crore is ICB Group's share, Tk 300 crore depositors' shares and Tk 50 crore is with the bank's old shareholders.