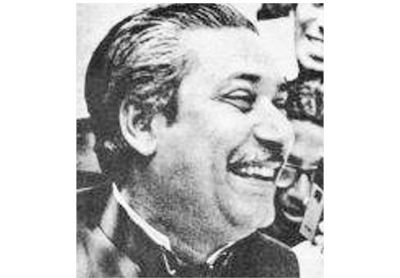 The unfinished memoirs of Sheikh Mujib are a vivid recollection and narration of history. They are the history of Sheikh Mujib's struggle for Pakistan under Muslim League banner, the post-liberation struggle to free Muslim League from the clutches of a few aristocrats, launching of the Awami League and finally routing of the Muslim League government in Dhaka in 1954 election under the banner of United Front. The memoirs ended here, but the struggle continued on issues of provincial autonomy, six-point programme and finally, independence of Bangladesh.
Sheikh Mujib's political mentor and guru was Mr. Huseyn Shaheed Suhrawardy, whom he first met when Suhrawardy, as a minister in the Fazlul Huq cabinet, visited the missionary school in Gopalganj. This was the beginning of a long and close relationship which ended in 1963 when Sheikh Mujib received Suhrawardy's dead body at Dhaka airport and was its pall bearer to the grave. Mujib was openly critical of A.K. Fazlul Huq for forming Shayma-Huq government in Bengal and opposing creation of Pakistan. But Mujib's father made him promise that he would never personally attack Sher e Bangla. On Bhashani, with whom he and Shamsul Huq shared a cell in the Dhaka Central Jail, Mujib writes: "The three of us used to pray together and after Magrib prayer Moulana Bhashani would teach us about religion from the Quran. This became a routine but Mr. Huq was a bit of a problem since he seemed unable to finish any prayer in under an hour."
In 1956, Sheikh Mujib, as the minister in charge of commerce, labour and industries in Ataur Rahman Khan's cabinet, in a surprise move took over control of the management of Dhaka Electric Supply Company from Octivious Steel, a British company inducted by the previous government. Sheikh Mujib overnight created the much needed East Pakistan Small Industries Corporation and Film Development Corporation by securing funds from the central government.
Sheikh Mujib, after resigning as minister, visited USA under a Leadership Grant in December, 1957. His first stop was Boston and Munier Chowdhury and I received him at Logan Airport. Mujib had to undergo surgery in Boston General Hospital where we took turns to look after him. He moved into Munier's small apartment for recuperation. It was here that I developed a close friendship with him which lasted until he was cruelly assassinated on this day 37 years ago. During his stay in Cambridge, Sheikh Mujib had a meeting with the Harvard Advisory Group consisting of Dean Mason, David Bell and Gus Papanek. David Bell later became the Budget Director and USAID Administrator under President Kennedy.
During my long association with Sheikh Mujib, I closely observed several traits of his character and the observations on various issues he made in his memoirs fully reflected his convictions:
* About Mr. Liaquat Ali Khan, Mujib observed: "He wanted to be the prime minister not of a people but of a party. He had forgotten that a country could not be equated with any one political party."
* On the quality of leadership, Sheikh Mujib said: "When we have an unprincipled leadership at the helm of affairs, we may make some progress for a while but such gains will vanish in times of crisis."
* On the killing of Ahmadias in Lahore in 1952, Mujib observed: "I know at least this much that no one shall be murdered because he holds views different from mine. That certainly was not what Islam taught and such an action was tantamount to a crime in the religion."
* On the role of Khawaja Nazimuddin during 1947 demarcation of boundary between India and Pakistan when Pakistan lost a number of Muslim majority territories, Mujib wrote: "The lesson in all these is that if leaders make mistakes it is the people who have to pay."
* On work ethics, Mujib writes: "When I decide on doing something, I go ahead and do it. If I find out that I was wrong, I try to correct myself. This is because I know that only doers are capable of making errors; people who never do anything make no mistake."
Mujib never betrayed or embarrassed his friends. On a visit to Lahore to organise Awami League party in 1950, he visited the Civil Service Academy to meet his friends who were under training in there. Sheikh Mujib never mentioned any name in his memoirs lest his friends were harassed by the government. In Chittagong in 1961, I met him at Kalurghat waiting for the ferry to take us across Karnafully. He declined my invitation to visit my home because he was a persona non grata to the government and could not embarrass the deputy commissioner.
Sheikh Mujib's life was one of constant sacrifices. He believed that "to do anything great, one has to be ready to sacrifice and show one's devotion. I believe that those who are not ready to sacrifice are not capable of doing anything worthy. To engage in politics in our country, one must be ready to make huge sacrifices to make our people happy."
Sheikh Hasina deserves praise for preserving and publishing Sheikh Mujib's memoirs. But now that she has presented the nation with Mujib's teachings, political philosophy and spirit of sacrifice, the burden is on her to instill those qualities in the Awami League leadership.

The writer was the first finance secretary under Sheikh Mujib.