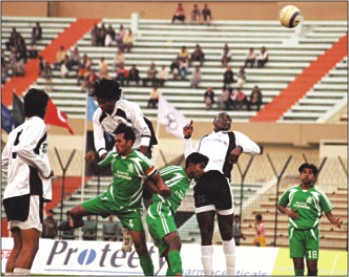 Victoria Sporting Club produced a heart winning performance in yesterday's Protiti Pharma Victory Day Club Cup match but that was not enough for Abu Yusuf's inexperienced boys to collect full points against Mohammedan Sporting Club.
Tournament hosts and title contenders Mohammedan not only looked out of touch but also so pathetic at times during the goalless draw that even the scanty crowd at the Bangabandhu National Stadium booed their favourite team.
Mohammedan, however, remained atop Group A with one win and a draw with Arambagh, who edged Youngmen's Club Fakirerpool 1-0 in the day's earlier match, following closely.
Both sides have four points but when they meet in tomorrow's group finale, Mohammedan will have the edge over their B. League neighbours by virtue of a better goal difference.
Victoria, after two draws in as many matches, have a good chance to reach the last four if they can beat fellow Senior Division side Youngmen's tomorrow.
Iddi Badambuze scored the all important goal for Arambagh after seven minutes when the Ugandan striker received a cross from guest midfielder Liton just inside the area and beat the opposition goalkeeper with an angular drive.
Iddi earned a penalty in the 73rd minute when he was tripped by Youngmen's defender Akramuzzaman Liton inside the penalty box but Liton's shot from the spot was saved by Mamun Khan to deny Arambagh a bigger win.
The day's second match began after a one-minute silence was observed to pay tribute to Saifuddin Ahmed Manik, a politician and sports organiser who died yesterday.
Victoria started brightly, stringing neat short passes together to unsettle the rival backline which looked too slow for the speedy youngsters of the only unbeaten side in the ongoing Senior Division League.
After failing to make most of two early freekicks, Turjo got behind the Mohammedan line in the 28th minute but the 17-year-old Victoria striker's low shot was saved by custodian Zia, who neutralised an effort by Arafat a minute later.
The lacklustre black and whites really threatened to score in the 39th minute but Charles Figo, who raced in with a through from Farhad, failed to utilise the rare chance as the Nigerian's low left-footer was palmed out by Mostafa at the Victoria goal.
Mostafa's spectacular save two minutes after the break kept Mohammedan at the bay for the rest of the game when the diving goalkeeper's reflex denied Faisal Mahmud's scorching shot from point blank range.
Mohammedan coach Shafiqul Islam Manik, who fielded six defenders, pushed in an attacking midfielder midway through the second half but the change hardly made any difference.
Polo saw his dipping freekick from 40 yards miss the mark for inches before Mithun squandered a great opportunity for the boys in green in the 76th minute.
The diminutive striker, who has scored six goals in seven Senior Division matches, caught veteran Jewel Rana on the wrong foot to get himself in a scoring position after latching onto a long ball but lost control under pressure from the lone keeper. An onrushing Polo got the loose ball but he was too late to get rid off the covering defenders.
Five minutes later, rightback Mamun fired from long range but fortunately for Mohammedan, the ball went wide of the far post after beating keeper Zia.
Meanwhile, the three-way race in Group B for the semifinal spots intensifies today with giants Abahani and Muktijoddha facing the threat of elimination in the last group match.
A victory by Badda -- who upset Abahani 1-0 in the opener -- against winless Dhaka Wanderers in the first match would mean bad news for Abahani who will have to beat Muktijoddha to reach the semis later in the day.
Muktijoddha, who lead the group with four points, can afford a draw in any case as Abahani and Badda both have three points.
Yellow cards: Ariful, Sharif, Jewel (Mohammedan)
TEAMS
Mohammedan: Zia, Kamal (Arafat), Ariful, Jewel, Biplab, Sharif, Saikat (Rony), Faisal, Monwar, Farhad and Figo.
Victoria: Mostafa, Mamun (Hassan), Kashem, Ziaul, Ashraf, Zahidul (Alamgir), Swapan, Polo, Turjo and Mithun.
Referee: Tayab Hassan.