Violence and death on JU campus 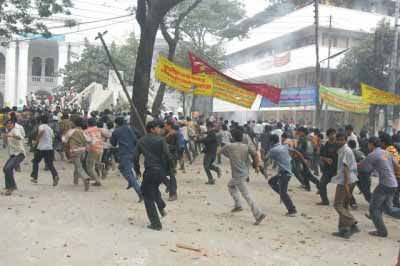 The Jahangir-nagar University (JU) campus is again jolted by student violence. And Zubair Ahmed, a fourth year student of the English department, had to pay in blood for the factional war that erupted between the two groups of pro-government student bodies, the Bangladesh Chhatra League (BCL) on January 8.
So far as the report goes, the cause of the violence had nothing to do with any ideology or a greater cause of the student community, though the murder of a student under any circumstances is reprehensible.
Reports have it that the BCL faction responsible for Zubair's murder was getting the JU administration's patronage. As it has been happening from time to time, the recent violence can be traced back to clashes of interests over purely philistine motives.
Violence on the JU campus is nothing new. The JU have witnessed very ugly forms of factional wars between different groups of BCL cadres in the past. Students were even flung from rooftops of dormitory buildings. Brawls erupting among student factions often ended up in armed encounters. Such scenes were common in 2009 and 2010. And in every case, the trouble would arise from controlling accommodations in the student dormitories, or occupying positions in the student committees, or from purely business-related issues. Just think of to what an abysmal low some student organisations of today have stooped compared to the glorious traditions of their predecessors, who struggled against undemocratic and dictatorial regimes to establish justice and democratic and human rights of the people.
Perhaps, the parents of Zubair may have started to think whether their decision to send their son to the university for higher study was right or not. Far from filling their hearts with pride from his academic excellence, their beloved son has returned home as a corpse. There is a saying in Bengali: "There is nothing so heavy as the dead body of a son on his father's shoulder." Imagine the tragic scene of Zubair's father is carrying his son's mortal remains to the graveyard.
The post-violence situation on the JU campus has taken a completely new turn. Now, along with the general students, a large number of teachers have joined the protest demonstrations.
Some 2,000 students under the banner of "JU against terrorism" have been holding protest demonstrations with their eight-point demands that include the removal and punishment of the proctor, removal of other members of the proctor-ial body for its failure to ensure students' safety, dissolution of a probe body formed to investigate the Zubair murder and the formation of a new committee which will submit its report in a week.
The teachers' association, the Jahanirnagar University Teachers Association (JUTA), angered by the failure of the JU administration to ensure campus security and safety and failure to prevent the grievous murder of a student, had organised a meeting following the violence. At that meeting, the fingers were pointed at the JU administration, particularly the Vice Chancellor (VC) Shariff Enamul Kabir.
The allegation was that the VC was backing BCL faction behind the killing. That triggered an altercation between the accusing teachers and those belonging to the VC's coterie. The situation precipitated into violence and the JUTA president was roughed-up allegedly by the university proctor.
As a sequel to this untoward incident, the general teachers under the banner of Shikkhak Samaj are refraining from taking classes in protest against the assault on the JUTA president and have made a common cause with agitating students. The other group of teachers, who support the VC, are chanting a different slogan under the banner of "Progressive teachers" protesting what they termed "disruption of 'normal activities' on the campus and 'propaganda' spread by 'a section of teachers and students."
Similarly, the faction of students allegedly patronised by the VC is trying to intimidate the agitating students as well as the teachers.
The VC, to whom the agitating students and teachers have already submitted their memorandum containing the demands, has remained rigid about bowing to the pressure to dismiss the proctor.
The pro-VC teachers, on the other hand, have expressed their determination to take classes and are trying to convince the students of their stand going from door to door. Both the groups are now on a collision course. Despite this volatile situation and without any visible attempt to resolve the issue amicably, the VC is issuing assurance that he will restore congenial atmosphere on the campus.
Even in the past cases of student violence, the incumbent VC would utter similar words of assurance of restoring academic atmosphere on the campus. But unfortunately, nothing has changed; rather the hope of a violence-free campus is fading day by day.
The latest situation in JU mirrors, as it were, the overall political situation of the nation in microcosm.
Looking at the nature of these incidents of student violence, it is getting harder and harder to draw any fine line between modern-day campus violence and gangland warfare. And from the allegations and counter-allegations surrounding the latest spurt of JU violence, it is becoming clear that there is more to these violent outbursts than meets the eye. As in the present case, the university administration cannot also wash its hands of these ugly conflicts.
When a student gets killed by his fellow students and a teacher is assaulted by one his colleagues in a institution of higher learning and the head of its administration remains rigid about his own terms, his words of assurance sound hollow.
The government has a responsibility in this case. It must give a serious look into the matter and help to restore peace on the JU campus. To achieve that, it should in no time mount an investigation by a neutral probe body into the incident and bring the killers and their collaborators, whoever they may be, to justice.