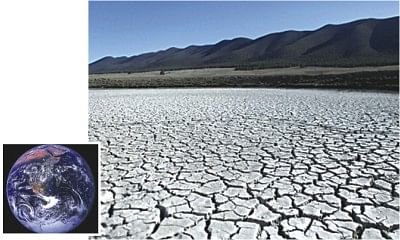 Images like this may become more common as a UN panel on climate change predicts a 6.4° Celsius temperature rise by 2100. Inset, Planet earth.Photo: Reuters

A group of scientists, philosophers and legal scholars are looking into radical geoengineering plans to artificially cool the Earth in a bid to reverse global warning.
A UN climate conference in South Africa on Friday said that - in theory - reflecting a small amount of sunlight back into space before it strikes the Earth's surface would have an immediate and dramatic effect.
Within a few years, global temperatures could return to levels of 250 years ago, before the industrial revolution began dumping carbon dioxide into the air, trapping heat and causing temperatures to rise.
But no one knows what the side effects would be.
The idea of solar radiation management 'has the potential to be either very useful or very harmful,' said a joint study led by Britain's Royal Society, the Washington-based Environmental Defence Fund and TWAS, the academy of sciences for the developing world based in Trieste, Italy.
The final report is the climax of a year-long dialogue spanning experts in 22 countries.
It was prompted by the failure of a 20-year UN negotiating process to take decisive action to curb greenhouse gas emissions, mainly from burning fossil fuels, responsible for climate change.
'The slow progress of international climate negotiations has led to increased concerns that sufficient cuts in greenhouse gas emissions may not be achieved in time to avoid unacceptable levels of climate change,' the report said.
But geoengineering is not an alternative to climate action, said John Shepherd, a British oceanographer from the University of Southampton who was the lead author of the report.
'Nobody thought this provides a justification for not reducing carbon emissions,' Shepherd told AP.
'We have to stick with Plan A for the time being, and that could be a very long time indeed,' he said. 'This would buy time for people to make the transition to a low-carbon economy.'
Deliberately tinkering with nature to counter global warming can only be a stopgap measure, and is fraught with danger, the report said.
The Intergovernmental Panel on Climate Change sees temperatures rising as much as 6.4 degrees Celsius by 2100, swelling the seas with melted glacial water and disrupting climate conditions around the globe.
Action such as spraying sulfur into the air or brightening clouds with sea water to reflect more sunlight would have to be sustained indefinitely because 'there would be a large and rapid climate change if it were terminated suddenly,' the report said.
Theories of manipulating the climate to impede global warming have been on the fringe of scientific discussion for some time, but is now moving towards the mainstream.