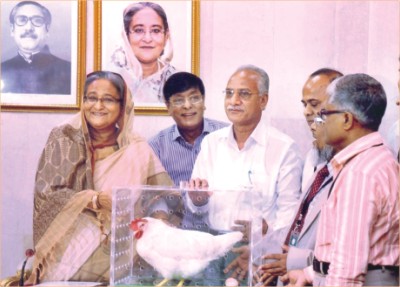 Bangladesh Livestock Research Institute hands over the newly invented layer chicken, named "Shubhra", to Prime Minister Sheikh Hasina at a function at her office in the city yesterday. Photo: PID

Bangladesh Livestock Research Institute (BLRI) has developed a local variety of chicken ushering in a new hope in the country to reduce dependence on import of layer chicken to meet the demand of protein.
The BLRI handed over the newly invented layer chicken, named "Shubhra", to Prime Minister Sheikh Hasina at a function at her office yesterday.
Sheikh Hasina during her last tenure asked the BLRI to take steps to produce the local variety of chicken to reduce dependence on import of layer chicken from abroad, PM's Press Secretary Abul Kalam Azad said, briefing journalists after the function.
The BLRI through its efforts for the last 11 years has innovated the new species of chicken with the support of Japan International Cooperation Agency (Jica), Azad said.
The new species can lay egg within 19 weeks and its annual laying capacity of eggs is around 280-295. The chicken has disease resistance power and also immunisation capacity to survive in local environment, BLRI officials told the prime minister.
Addressing the function, Hasina urged the scientists to make their best efforts for development of poultry and dairy industries in the country to address the shortage of meat and protein.
She underscored the need for setting up cold storages in the haor-baor areas for preservation of the locally produced fishes, meats, and chickens. She also stressed the development of market places in the suburban areas of the capital city to help the farmers sell their produces at fair prices.