Ramendu Majumdar A man of goodwill, theatre and peace 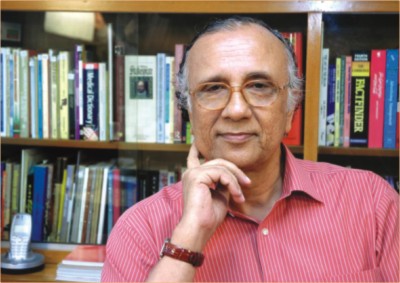 When writing about Ramendu Majumdar, where shall I start? Not an easy task. When I heard about him for the first time, a friend told me that he is a “prince of Bangladesh”. That was probably about twenty years ago, I was attending my first congress of the International Theatre Institute (ITI). I knew only a few people and did not understand the structure of the organisation -- neither the fight about petty points at the general assembly, nor the value of each of the delegates. I remembered the “prince” remark, but didn't dare to ask him if he was a prince or not; actually I never asked him that. But I observed: whatever he did, he did in a princely manner.
Many years later, when Ramendu Majumdar invited the Executive Council of ITI to Bangladesh, the media had a big influence on my opinion about his country: fear, uncertainty and danger were the bad news spread through the newspapers and the TV news in Europe. Only after talking to my colleagues I agreed to travel. The hospitality Ramendu Majumdar and his friends offered me, the culture, the theatre, the nature and the people in general inspired a great love affair with Bangladesh and Bangladeshis.
As there was an international book fair in Dhaka, and Ramendu Majumdar and I shared the same interest and affinity with books, he took me to the event. I was astonished that so many people approached him and wanted his autograph. When I asked him, if they knew him as an actor, stage director or theatre producer, he smiled and said: “No. They know me as a cultural activist and a pro-liberation force.” I remembered my visit to the Liberation War Museum, and the impression it made to me. The atrocities of war, of hatred, of senseless killing, of oppression of the Bengali people and language were vivid. And I also remembered when I heard about Bangladesh the first time: it was regarding the Concert for Bangladesh featuring George Harrison and his friends. After knowing about his activities during the Liberation War, I understood his dedication towards his country, peace and the theatre community.
With his friends (some of them were freedom fighters as well) Ramendu Majumdar founded the Bangladesh Centre of the International Theatre Institute and the country became part of the international theatre community. At that time the performing arts in his country were vivid, there was a heritage of theatre and dance, but it was not well known all over the world and it lacked a force to cultivate it within the country. Through his relentless and determined intention, he founded a firm and stable centre in Bangladesh, and the Bangladeshi theatre and dance became known to world. At the beginning the Bangladesh initiative within the institute had to overcome some obstacles, and was not immediately accepted. But through his vision and his gentle, but goal-oriented actions the centre became one of the strongest units in the worldwide network. From a few delegates that attended the ITI World Congresses in the beginning it grew to a big delegation. Today, the members of Bangladesh Centre are safe pillars of the activities of a multitude of ITI Committees -- especially in the Communication Committee that is publishing “The World of Theatre” (biannually), produced and printed in Bangladesh.
Ramendu Majumdar is definitely “un homme de bonne volonté” -- a man of goodwill. His love for the performing arts in Bangladesh is not based on an egocentric viewpoint, but on a belief that it is for the best of the performing arts, the artists, and the culture of Bangladesh.
Ramendu Majumdar is definitely a man of and for peace. His commitment towards the increase of mutual understanding between people of different nations, religions, beliefs, cultures and ethnicities can be felt when he gives a speech, when he leads a meeting or whenever he gives time and energy to the activities of the International Theatre Institute.
He told me once that he wanted to become a politician when he was young. I am sure that Bangladesh would have a brilliant man of politics in him. But as a man of culture I am very glad that he did and does invest his energy to the performing arts, to the education in the performing arts and in its use for development, mutual understanding and peace. This sector definitely is stronger through his past and present activities -- and it will increase its greatness through his future initiatives as well.
In 2008, the International Theatre Institute recognised his worldwide endeavours with electing him as President of the organisation. It was well deserved. The world, the international performing arts, Bangladesh and its theatre community, his wife and family -- we can all be proud to have Ramendu Majumdar in this position.
He would say: “Long live Bangladesh, long live the Bangladeshi theatre, long live theatre!” I'd like to add: “Long live Ramendu Majumdar!”
And if I may also add today: “Happy birthday, my dear friend!”
I wish you excellent health, inspiring days, weeks and years to come. And I hope that we continue to have a great collaboration at the International Theatre Institute, the performing arts and that our cordial friendship continues in the future.
I end with my deepest gratitude for the friendship, for the inspiration, for the assistance and understanding you expressed towards me in the past.
Thank you my dear friend.

Tobias Biancone, A Swiss poet-playwright, is the Secretary General of the International Theatre Institute.