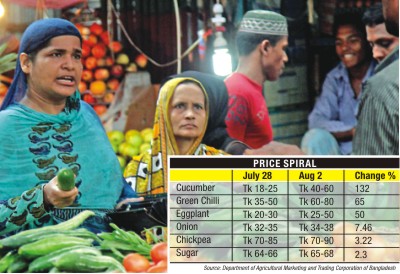 A woman bargains with trader over the price of cucumber at Shantinagar Bazar in the city yesterday. Cucumbers were selling at maximum Tk 60 a kg, which was Tk 25 on Thursday. Photo: Shawkat Jamil

Prices of various vegetables, used to prepare popular iftar dishes for breaking Ramadan fast, skyrocketed yesterday amid a surge in demand.
Prices of sugar, onion, and chickpea also marked rise, after a brief stability which followed the businesses assurance to Prime Minister Sheikh Hasina that they would keep the prices stable.
The prices of cucumber shot up 132 percent yesterday to as high as Tk 60 a kilogram, in the markets of the capital, the highest price of which was Tk 25 on Thursday.
Prices of green chilli soared 65 percent to as high as Tk 80 a kilogram, the highest price of which was Tk 50 on Thursday, according to the Department of Agricultural Marketing.
Eggplants were found selling for Tk 25-50 a kg, the highest price of which was Tk 30 on Thursday.
''I am afraid we can't have our favourite dishes during iftar this Ramadan,'' said Mahabub Rahman, who returned from a kitchen market at Palllabi of the capital without buying cucumber.
''I wanted to have cucumber for iftar, but dropped the idea due to exorbitant price. Market prices of essentials are too high for me to manage with my limited income,'' said Mahabub who earns Tk 9,000 a month working for a private firm.
The hike in prices of vegetables and other essentials coincides with a time when consumers of low and fixed income groups have been facing a gradual loss of their buying capacity due to soaring inflation over the last one year.
Clothing industry worker Md Ripon Islam, who also earns Tk 9,000 a month, said price spiral of essentials and rise in house rent have put his family in a tough situation.
''My monthly income finishes faster now than a year ago,'' said Ripon, who got a pay raise along with other garment industry workers by the end of last year.
He said, ''Price hike has already eroded my gains. The situation is so bad that I can't save at the end of the month for buying clothes for my wife and the kid.''
Under the circumstances, the government yesterday said it will distribute 66 thousand tonnes of rice for free to 66 lakh poor and destitute families.
The staple food will be distributed as part of the Vulnerable Group Feeding (VGF) Programme, and each family will get 10 kilograms of rice during Ramadan, according to a food ministry circular.
Yesterday, prices of tomato, lime, mango, and apple also rose as traders moved to cash in by higher margins by tapping into the increased demand.
Delwar Hossain, a vegetable retailer at Wari of Dhaka old town, linked the sharp hike in prices of the vegetables to the rise in demand.
Prices of other vegetables however remained steady, said vegetable retailers.
''I became surprised going to the wholesale market early in the morning today. There was a rush of buyers,'' said Delwar yesterday.
He said he bought 5-kilogram of green chilli for Tk 200-220 three-four days ago.
But prices of the same amount of green chilli shot up to Tk 340 yesterday, said the retailer, who procured increased quantities of cucumber, green chilli, and lime to cash in on iftar related high demand.
Yesterday, prices of chickpea, a common item for iftar, rose to Tk 70-90 a kg which was Tk 65-85 the day before, shows the data of Trading Corporation of Bangladesh.
Retail prices of sugar rose to Tk 65-68 a kg yesterday which was Tk 65-66 the day before. Low supply but high demand encouraged a section of traders to charge higher prices.
At Moulvibazar, wholesale price of sugar rose to as high as Tk 65 a kg yesterday which was Tk 62-63 early this week, said a wholesaler, who preferred to remain unnamed fearing backlash from the government, as the government earlier fixed Tk 65 a kg retail price ceiling for sugar.
Another wholesaler Abul Hashem, who is also the vice-president of Bangladesh Sugar Merchants Association, however said sugar was being sold for Tk 63-64 a kg at the wholesale level.
Hashem claimed that traders at Moulvibazar were not selling the sweetener at increased prices.
''But what can we do if anyone sells sugar without issuing memos, taking advantage of the supply shortage, '' he asked.
He said the daily demand for sugar has risen to 4,500 tonnes due to its use in many sweet iftar items, but supply remains below 3,000 tonnes.