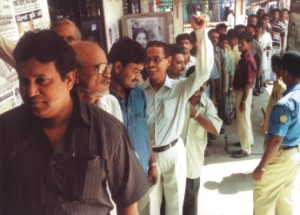 Give us the power to govern ourselvesPhoto: STAR

THE strengthening of local government institutions to address major issues like poverty reduction, good governance, infrastructure development, disaster management etc. is no more a matter of controversy, rather it is a consensus of the whole nation.
For a rural, agro-based national economy and a populace with minimum demand from life, an efficient and dedicated local government can deliver services and generate social and economic awareness to achieve the national goals of Bangladesh.
Keeping in view these priorities and necessities, a grand assembly of local government representatives was arranged on January 5 at Parade Square, Dhaka, to discuss at length the recommendations of the committee constituted for strengthening local government. The Ministry of Local Government, Rural Development and Cooperatives deserves appreciation for organising such a gathering of elected representatives, perhaps the biggest one ever held during this government's tenure.
This has, in fact, created an opportunity for exchanging views and understanding between the central government and the local level representatives to remove confusion, if any.
The chief adviser, chief of the army staff, adviser in charge of local government in their deliberations made it clear that they had every intention of decentralising, and devolving the authority to local governments. They have, however, emphasised the election of honest, dedicated and capable representatives to ensure good governance, and build up a just, equitable and enlightened society.
The salient features of the recommendations of the committee, headed by Health Adviser Dr. A M M Shawkat Ali, were made public and discussed in detail, and the representatives were invited to comment on them. The three-tier local government institutions -- zila parishad, upazila parishad and union parishad -- and the city corporations and municipalities would be strengthened with the enactment of two Acts as proposed by the committee. A union parishad will have 15 wards in lieu of 9, and women's representation might be raised to 40 percent.
Besides, service rules, need-based manpower, source of revenue, capability building, computerisation at all levels, eligibility of candidates, transparency and accountability of the parishads etc., as suggested by the committee were discussed. The concept of gram sarkar did not find a place in the recommendation, whereas the city government idea formulated by mayors was kept for consideration. The announcement of the enhancement of honorarium of local representatives received applause from almost 8000 representatives present in the assembly.
The most important issue for consideration now is about the timing of the election. An experienced school of thought feels that dedicated, capable and dignified non-partisan representatives would have fair chances of being elected if local government election is arranged prior to the National Parliament election.
This will eventually help reduce party conflicts, false voting, and demonstration of financial and muscle strength to influence the voters, which negate the concept of free and fair election. Secondly, the genuineness of the voter list can be verified, and corrections made. Thirdly, the importance of the National Assembly election will be reduced if the upazilla election is held earlier, and local government representatives are in their positions. Fourthly, this will obviously create confidence about the process of election.
Another group is of the view that the understanding in the process of planning and development could be coherent provided the central and the local governments think along the same wavelength. In the absence of such a situation, the central government might supersede many local bodies to see its own men in power in the resultant vacancy.
The election of 4498 union parishads, 480 upazila parishads, 390 municipalities, and 6 city corporations is not an easy task. It might require few months to complete, and it is not possible to hold the Parliament election at the same time. Therefore, June or July to complete the National Assembly election before the end of 2008 might hold the local government election.
In Bangladesh, elections were held many times before. There were elections for National Assembly 8 times; on March 7,1973, February18, 1979, May7, 1986, March 3,1988, February 27,1991, February 15,1996, June 12, 1996, October 1, 2001. There were presidential elections 8 times, and referendum 3 times; on May 30,1977; March 21,1985 and September 15, 1991.
Besides, there were union parishad elections 7 times, city corporation 5 times, municipal elections 7 times, and upazila elections 2 times. Bangladeshis enjoy election fever, and take so much interest that some candidates consider victory or defeat as the prestige of their family and tradition.
There is no controversy about the strengthening of local government, even among the politicians, though there is difference of opinion about the election of upazila parishad, even within the same political party. Some politicians are of the view that elected upa-zila chairmen might radically reduce the importance of MPs in the locality. This was the only reason for which, on different occasions, cabinet meetings could not come to a decision about the election of upazila parishad.
Thus, the upazila system has been a non-functional institution since 1991, although the infrastructure and manpower are in situ in the name of upazila. On the other hand, an unconstitutional post of district minister was created to assert the influence of the party in power in the district.
The timing, and the process of holding election of the local government should be left to the Election Commission, as it is the prerogative of the Commission. The Commission should be given signal after the reform measures taken by the government to go ahead with the election. Local government elections, if organised freely and fairly on a level playing field before the Parliament election will have obvious reflection in the national level.
The Election Commission must be independent and capable of operating with adequate manpower and resources to act and decide for the restoration of democracy at the grassroots level, and establishment of democratic practices in the country.
In India, the Election Commission brought heterogeneous political parties under the umbrella of strong discipline when T N Shesan was the chief.
We are waiting for the day when our citizens will feel proud of our election system and see democracy in practice.

Dhiraj Kumar Nath is a freelance contributor to The Daily Star.