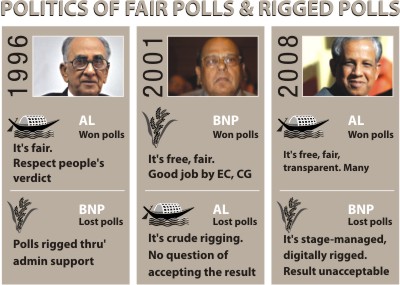 The Supreme Court has declared illegal a 15-year-old constitutional provision that mandates an elected government to transfer power to an unelected non-partisan caretaker administration to oversee a new parliamentary election on completion of its term.
In the same verdict yesterday the highest court said the voided system may be practiced for another two parliamentary terms for the sake of "safety of the state and its people".
The court also asked the parliament to amend the constitution to make sure that former chief justices or any other Supreme Court judges are not chosen as heads of caretaker governments in case the system is kept for another two parliamentary elections.
A seven-member SC panel, headed by Chief Justice ABM Khairul Haque, reached the verdict on majority vote.
It thus also rejected a 2004 High Court ruling that upheld the 13th amendment to the constitution which provides for a 10-member non-partisan caretaker government to take over following the dissolution of a parliament and resignation of an elected government on completion of its term.
A caretaker government runs the routine administration and assists the Election Commission in conducting the polls.
The High Court ruled the system legal after a Supreme Court lawyer M Salimullah challenged the 13th amendment in January 2000 in a writ petition saying the change distorts the principle that the republic will be governed by an elected government.
After Salimullah's death, another Supreme Court lawyer Abdul Mannan Khan filed an appeal in June 2005 against the High Court ruling in the Supreme Court.
In its brief verdict yesterday the Supreme Court said, "The Constitution (Thirteenth Amendment) Act, 1996 (Act 1 of 1996) is prospectively declared void and ultra vires the Constitution."
"The election to the Tenth and the Eleventh Parliament may be held under the provisions of the above mentioned Thirteenth Amendment," it said.
"The parliament, however, in the meantime, is at liberty to bring necessary amendments excluding, the provisions of making the former Chief Justices of Bangladesh or the Judges of the Appellate Division as the head of the Non-Party Care-taker Government," the verdict added.
Introduced in 1996 through the 13th amendment to the constitution by a controversially elected parliament, the system of non-party caretaker government has seen the holding of three successful parliamentary elections in 1996, 2001, and 2008 that were considered free and fair by both local and foreign observers.
The immediate past chief justice is the first choice to become the head of a caretaker government with the formal title of chief adviser.
Two former chief justices, Justice Habibur Rahman and Justice Latifur Rahman served as chief advisers respectively in 1996 and 2001.
Fakhruddin Ahmed, a former governor of Bangladesh Bank, held the office to oversee the 2008 parliamentary voting after street protests, led by Awami League and its allies, forced then-president Iajuddin Ahmed to quit the post of the chief adviser.
The caretaker system was also hailed as appropriate for Bangladesh which has a history of bitter political hostilities and mistrust.
Awami League, led by then opposition leader Sheikh Hasina, pioneered the movement for introducing the non-partisan caretaker system.
Her bitter rival Khaleda Zia, then the prime minister, vehemently opposed it.
This time the Supreme Court verdict has been welcomed by Awami League, the current ruling party. Opposition BNP said it will wait to give its reaction.
The verdict triggered mixed response among lawyers with some calling it contradictory and Attorney General Mahbubey Alam hailing it.
Mahbubey Alam said the verdict is "right in principle". The next two parliamentary elections will be held under caretaker governments if the constitutional provisions are not amended, he said.
If the next two elections are not held under caretaker governments, chaos and unrest will take place in the country, he added.
Senior lawyers Barrister Rafique-ul Huq and Khandker Mahbub Hossain, president of the Supreme Court Bar Association, termed the SC verdict self contradictory, saying the SC declared the 13th amendment illegal, but suggested holding next two parliamentary elections under this law.
Barrister M Amir-ul Islam said the parliament has to play a responsible role in finding an alternative to the caretaker government system.
Barrister MI Farooqui, who stood for the petitioner, expressed satisfaction over the SC verdict, saying it is good for the nation and the constitution.
Earlier, the SC heard for 10 days opinions and arguments from eight amici curiae (friends of the court), and the counsels for both sides of the appeal.
Of the amici curiae, Dr Kamal Hossain, TH Khan, Mahmudul Islam, M Amir-Ul Islam, and Rokanuddin Mahmud gave opinions in favour of the caretaker government system.
However, two jurists -- Rafique-ul Huq and Dr M Zahir -- suggested alternatives to the system.
Amicus curiae Ajmalul Hossain and the appellant's counsels MI Farooqui and Mohsen Rashid placed arguments against the caretaker government system. Instrumental behind the introduction of caretaker government in 1996, the Awami League now welcomes the Supreme Court verdict that declares the system illegal. Then in power, the BNP was dead against the concept. Now in opposition, the same party appears concerned.

Hasan Jahid Tusher
Ruling Awami League-led grand alliance has welcomed the Supreme Court verdict that declared illegal the constitutional provision for the caretaker government.
"We definitely welcome the apex court decision," AL presidium member Obaidul Quader told The Daily Star in an immediate reaction yesterday.
The caretaker government system was introduced to meet a special need and it cannot be a permanent solution, Quader said. Both the AL and BNP should reach a consensus through discussion on how or under whom the general elections should be held in future, he added.
Ironically, the caretaker government system was introduced in 1996 in the wake of vigorous movement led by Awami League.
Quader observed that it is difficult to reach an understanding on the issue if the political leaders cannot come out from their "obsession to the past".
A civil society member, a former bureaucrat, an eminent educationist, a former minister or a former lawmaker might head the caretaker government in future in line with the apex court verdict, he suggested. The AL would not hold one-sided elections, said Quader, also chairman of the parliamentary committee on information ministry.
Since 1991, those who lost in the general elections held under an interim or caretaker government raised questions on credibility of the polls and were not ready to accept the results, he added.
Quader urged the main opposition BNP to sit with the parliamentary constitutional amendment committee and place their opinions in order to reach a consensus in this regard.
"I personally respect the judgment of the Supreme Court," said HM Ershad, chairman of Jatiya Party (JP), the key partner of ruling AL-led grand alliance, in his immediate reaction to The Daily Star.
He said the judgment is the reflection of his party's suggestion to the special parliamentary committee to amend the constitution.
"I told the committee that the judiciary turns controversial if the chief justice is made the chief adviser to the caretaker government and the Supreme Court today [yesterday] observed the same," added the former president.
He said all the major political parties would nominate a person to be the chief adviser in future.
He however questioned the consequences if the two major parties -- AL and BNP -- do not reach a consensus. "History says the two parties don't reach an agreement."
The Workers' Party of Bangladesh welcomed the SC judgment and said it is an important verdict considering the prevailing situation. This judgment has made it easy to find out an alternative to the judiciary involved in the caretaker government system, said Rashed Khan Menon, president of the party, in his immediate reaction.
He said all the political parties would now have to find an alternative through discussion and consensus under whom or which system the elections should be held.
Menon added the BNP-led opposition must reach a consensus with the government for the sake of keeping democracy continuing; otherwise it would seem they "have an evil intention".
Law Minister Shafique Ahmed said the caretaker government will not be needed if the Election Commission is independent and strong.
If the EC is independent, it can hold elections fairly and neutrally, he said in his reaction to reporters at his secretariat office.
Shafique said the EC held upazila and municipality elections in a free and fair manner.
Democracy will get an institutionalised shape if the EC plays its independent role strongly, he said as a lawyer in his personal reaction.
The law minister said he felt that the SC has declared illegal the 13th amendment to the constitution on consideration that the state should be governed by elected representatives of people, and governing the state by unelected persons is unconstitutional.
Parliament will take a decision on amending the constitution after considering the SC observations with wisdom, he expressed the hope.
Jatiya Samajtantrik Dal President Hasanul Huq Inu termed the verdict “time worthy”. “The caretaker government system could not continue forever,” he said in a press statement.
Inu, also a lawmaker, said considering the prevailing political situation of the country, the next two elections should be held under the caretaker system.

Staff Correspondent
BNP has decided to come up today with its formal reaction to the Supreme Court verdict on 13th amendment to the constitution that declared the caretaker government system illegal.
The main opposition party's policymakers at a meeting last night chaired by Khaleda Zia reviewed the judgement and finalised their stance on it.
The party will give its formal reaction to the judgement at a press conference at its central office at Naya Paltan in the city at 4:00pm.
Meeting sources said Khaleda took the views of all those present at the nearly two-hour meeting that started around 9:30pm, and asked the party leaders to be strict on the existing provision of caretaker government.
“Chairperson (Khaleda Zia) discussed the issue with the senior leaders and policymakers of the party. We will announce our position tomorrow [Wednesday] at a press conference,” acting Secretary General of BNP Mirza Fakhrul Islam Alamgir told The Daily Start at 11:50pm.
The meeting was attended by Khandaker Mosharraf Hossain, Moudud Ahmed, Rafiqul Islam Mia, MK Anwar, Sadeque Hossain Khoka, Fakhrul Islam and Supreme Court Bar Association President Khandaker Mahbub Hossain.
Meanwhile, two allies of BNP in the four-party alliance led by it -- Jamaat-e-Islami and Bangladesh Jatiya Party (BJP) -- expressed deep concern over the judgment that declared the caretaker government system illegal.
In a statement, Jamaat said, “Present political reality proves that a free and fair election is not possible under a political government, and without a caretaker government system.”
BJP Chairman Andaleeve Rahman Partha said caretaker government system is a must for holding a credible election in the prevailing political atmosphere in the country.
Contacted earlier, Moudud Ahmed gave his "personal reaction" saying the SC verdict might create further political and constitutional crisis in the country.
Moudud, also a former law minister, termed the verdict "self- contradictory" and said, “On the one hand the court said caretaker government system is unconstitutional and undemocratic, and on the other it suggested holding the next two elections under caretaker government.”
Meanwhile, BNP chief and Leader of the Opposition in the House Khaleda Zia has been opposing appointment of Chief Justice Khairul Haque as head of the next caretaker government. As per the present provision, he is supposed to be chief adviser of the next caretaker government.
BNP leaders including Khaleda repeatedly said [since the verdict on fifth amendment] said the incumbent chief justice himself is “partisan”.
“Chairperson has already said a caretaker government headed by a non-partisan person is a must for holding the next election. Otherwise, BNP will not accept it,” Fakhrul said at a function yesterday organised by Tejgaon unit of Swechchasebok Dal, a front body of BNP.