Of bauls, of things Mephistophelean 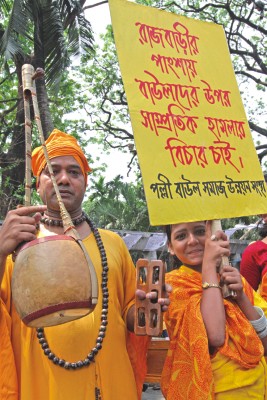 Dread-ful things are happening in the country. And if they keep happening, it will be our heritage, our cultural traditions that will eventually mingle with the dust. It is no laughing matter when twenty eight bauls, followers of the venerable Lalon, are put to public humiliation on the orders of a half-baked cleric in Pangsha of Rajbari. Their beards and hair and moustaches were clipped or shaved off on the orders of a fanatic on the wild charge that these worshippers of divinity were apostates, were indeed Hindus and therefore needed to be brought back to the 'right path.' You wonder where all this audacity in these zealots springs from. More seriously, it is this audacity that sends tremors going all across and over your sensibilities, this black courage that not even the government appears to be able to put down with a firm hand.
We will not go into a discourse on Lalon and his philosophy of God and of the universe we are part of. Spiritual figures like Lalon hold a niche far above our power to analyse or subject to academic dissection. And because they do, it remains our faith that Lalon, that indeed all men of God who have caused Creation to be manifested so potently in this land of poets, mystics and preachers, will hold, now and for all time, the Olympian grandeur we associate with their holy existence. Remember if you will the desecration the Taliban subjected the Bamiyan statues to in Afghanistan. Those statues have been ground to dust and yet the calming memory of the statues remains in men's consciousness. It is the Taliban who struggle for respectability in a world they would rather mutilate to their liking.
Which is as much as to suggest that the misdeed perpetrated on the bauls in Pangsha by men with skewed notions of Islam ought not to be blown out of proportion. No, we do not blow it out of proportion. But we do understand, given the viciously mediocre times we inhabit, that there is a need for firm action against those who have of late sought to undermine the values we have for generations lived by. When Fazlul Haq Amini threatens Sheikh Hasina with doom, when the late Moulana Obaidul Haq informed an audience of the Islamic faithful some years ago that women were not ordained by the Lord of the Universe to govern nations, it is time for good men and women, for those who comprehend the essence of this free country, of civilized living, to sit up and take notice. These are men who have their acolytes in the shape of those ready and willing to commit sacrilege at the resting places of saints. The imam who had those twenty eight bauls hauled off to the barber's thought he was doing the work of God. It did not occur to him that he was trying to play God and that in doing so he was flailing away at God.
No, there is no surfeit of these blasphemers in Bangladesh. But, then again, do not forget that once upon a time not long ago the numbers of the Taliban in Afghanistan were negligible. Then these Taliban went on to create havoc in Afghanistan. Today they create havoc in not just Afghanistan but in Pakistan as well. Here in Bangladesh, the historical fact of religious militants setting off simultaneous explosions in all but one district in the country six years ago is a reality we have not pushed aside. Those men share something with the men who went after the beards and hair and moustaches of the bauls in Pangsha the other day: in the name of God they are forever ready to raise misanthropy into Mephistophelean anti-faith.
Which is why this nation, in the name of those who died in defence of its liberty, in the name of all faiths -- Islam, Hinduism, Christianity, Buddhism et al -- must watch out for these elements. Their evil-driven political ancestors once razed the Shaheed Minar to rubble in Bangladesh. Those ancestors left no trace of the Kali Mandir that once highlighted the expanse of the Race Course. It may well be that given half a chance, the likes of those who went after the bauls' beards and moustaches will one day go after the monuments that stand witness to the cultural legacy of this land. If these men can take to the streets not just in the name of the Creator but armed with copies of the Quran hugging their perspiration-driven chests, they can do anything. Remember the Spanish Inquisition, when self-professed representatives of God burnt good people at the stake and left the soul of society singed for centuries?
There is a malaise abroad in the land. It comes in the shape of fanatical persecution ... of Ahmadiyyas, of bauls, of men drawn to the spiritual glow inherent in Sufism, of helpless women, of enlightenment. It insults poetry and drags music through the mud. It seeks to stifle laughter and happiness. It aims at commandeering our faith. It undermines the good and the beautiful and the sublime in men and women.
It is time to draw a line in the sand. The moment is here and now to beat all these forces of darkness back into their caves. Shaming the bauls is to shame all of us. It is time to shame those who have caused us that shame.