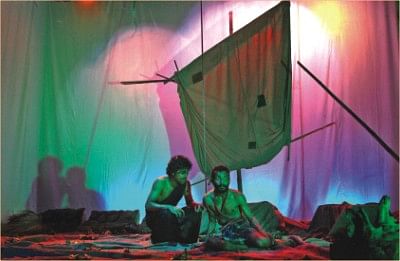 The fortnight-long theatre festival, featuring productions by students of the Department of Theatre, Dhaka University, began on March 1 at the university's Natmandal auditorium. The festival, titled 'Robi Srijonshil Tarunyer Natyaprakash 2011', features 25 plays. On the inaugural day, Syed Waliullah's "Ujaney Mrittu" was staged.
Featured plays at the festival highlight a diverse range of theatrical forms and styles -- from Bangladeshi indigenous to international classics.
Atiqul Islam directed "Ujaney Mrittu". The absurd play narrates the plight of a rural individual till his death. Through the play, the director has tried to focus on an individual's heartache and emotional void -- representing the widespread apathy in a corrupt world.
Khan Mohammad Rafiqul Islam played the protagonist. Apt use of rural elements to create the set was a highpoint of the production. However, the fact that the dialogues did not represent rural dialect was not ignored by the audience.
Tahsinur Rahman and Masud Rana donned the other two characters of the play. Masud Rana also did the set, light and costume designing.
The inaugural ceremony of the festival was held prior to the play. Vice Chancellor of Dhaka University, Professor AAMS Arefin Siddique, inaugurated the festival.
Today, two plays -- "Kichhu Ghashphul Shukiye Jaye" and "Bibhrantikor" -- will be staged. The show will start at 6:30pm.
Telecom operator Robi is the sponsor of the festival.