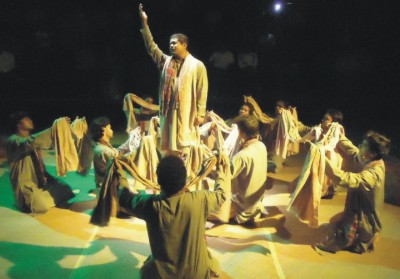 “It is mostly men who tell their stories but I want to tell stories that women want to say but very rarely seem to be able to. I want to explore female perspectives,” -- this was how Mukul Ahmed responded when asked why he often works with all-women casts. Last year in January, Mukul directed Mahesh Elkunchwar's "Sonata" that contained three female characters and in December [also 2010], once again, he presented Shakespeare's "Julius Caesar" in Cox's Bazar and Dhaka in which all the characters were played by women.
Would he say that he understands women? “Well, I do try to see and explain the whole being -- their beauty, blemishes, sharp intellect and the challenges they face.” When pressed again on the matter of his obvious bias towards women in the plays he directs, Mukul described how his mother played a major role in his life. “She was my first inspiration. She was an amazing storyteller and nurtured my dreams of becoming a narrator [through theatre].”
Mukul Ahmed is a Bangladeshi who has been living and working in London [UK] since the 1990s. Having gained an MBA in 1999 and an MFA in theatre direction in 2007, he has been professionally engaged by various companies in London. His most recent association has been with Tara Arts whose artistic director is the much-revered Jatinder Verma.
What is increasingly apparent is Mukul's tendency to explore the blending and weaving of different languages in drama, most notably Bangla and English, and a minimal approach towards storytelling. In fact, the former feature about his directorial choices can arguably be termed as unique. "Julius Caesar" was bilingual with actors speaking in both Shakespearean verses and Bangla. Mukul has already successfully implemented this new concept in England with a number of plays, most notably "Sonata", "Demon's Revenge" ("Meghnad Bawdh Kabya") and "A People's Romeo" ("Romeo and Juliet"). In fact "A People's Romeo" was awarded the much-coveted 3 stars by Guardian's theatre critic, Lyn Gardner.
Why are some of his plays bilingual though? Mukul explained that he is trying to create a model of bilingualism in theatre. According to him Bengalis tend to use a lot of English words in their daily life and most people in Bangladesh are bilingual. Theatre is a wonderful avenue through which bilingualism can be taken forward. “Audiences who came to see the bilingual approach to classics and modern drama in the UK and in Bangladesh were very encouraging and enthusiastic; to their surprise and delight they found the transition between the two languages smooth and effortless.”
Mukul is also being instrumental in promoting and providing opportunities for talented Bangladeshis living in the UK to work in mainstream theatre. Most notably Delwar Hossain, Leesa Gazi, Sohini Alam, Swagata Biswas, Nobonita Chowdhury and others have been favourably noted by critics of mainstream theatre in the UK.
Mukul said that he would like to help train theatre professionals in Bangladesh and he wants to create a new audience. “I work with classics as well as original plays and would therefore like to work with new writers who are equally at home in Bangla and English.” He, along with a few of his enthusiastic friends, has formed a theatre company in Bangladesh called Stage One Dhaka. The troupe's journey began with "Goodnight Ma" in 2008, followed by Mahesh Elkunchwar's "Sonata" (after it was staged by Tara Arts in London) and most recently "Julius Caesar". Interestingly many of the plays that Mukul has directed tend to be about displacement of individuals in a globalised world. Why? “Because I feel displaced. Actually I tend to live in a fantasy world and despite everything, I like being in that world. I want to continue to dwell in that fantasy land of theatre. I don't think I am much in touch with reality!”
Who was he mentored by? “I have been principally mentored by Jatinder Verma but Helena Kaut-Howson and John Langley continue to feature very prominently in my professional life.”
Are we going to see many more of his productions in Bangladesh? “Yes, most certainly. At present I am working with a Bangladeshi-American writer on a Bengali classic. Theatre is my passion and I hope to push the boundaries with every new production.”