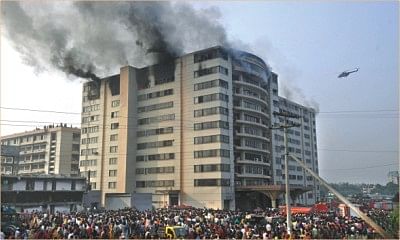 Plumes of black smoke coming out of That's It Sports Wear Ltd at Narsinghapur of Ashulia yesterday. Photo: STAR

At least 26 people were killed and 100 more injured when a fire swept through Ha-Meem Group's sportswear factory at Narsinghapur in Ashulia yesterday.
Of the deceased, three suffocated while the rest died falling from the 11-storey factory trying to escape the inferno.
The identities of those killed could not be confirmed as of filing this report at 2:15am.
The fire started in the finishing section on the ninth floor around 1:00pm. Most of around 5,000 workers of the factory were out for lunch at that time, Lt Col (retired) Delwar Hossain, deputy general manager of Ha-Meem Group, told The Daily Star.
After efforts for over seven hours, firefighters doused the flames around 8:30pm, said Brig Gen Abu Nayeem Mohammed Shahidullah, director general of Fire Service and Civil Defence.
It took time to put out the fire because of fabrics inside the factory, he added.
Police, Rapid Action Battalion and army personnel helped the firefighters bring the situation under control.
Neither the Ha-Meem officials nor the fire brigade could say what caused the blaze.
DG Shahidullah said the factory had enough fire-extinguishers, but the workers were not trained enough to use those.
Of the unfortunate 26, eight died at Shin-Shin Japan Hospital Ltd, one each at Nightingale Medical College Hospital and Doctors' General Hospital in Ashulia, five at Ashulia Centre for Women and Children Health, four at Dhaka Medical College Hospital, three at Enam Medical College Hospital in Savar, one at Savar Combined Military Hospital and three at the factory.
The bodies of the three who died inside were recovered from the ninth and tenth floors of the factory in the evening.
Witnesses said four out of seven exit staircases were closed. Desperate to flee the heat and smoke, some workers jumped off the windows, while some fell trying to get to the ground using rolls of cloth.
Many others were injured hurtling down the stairs.
Survivors said around 300 workers were either having lunch on the top-floor canteen or working on the ninth floor.
Mozammel, one of the injured, said, "As someone screamed 'fire', many ran out of the 10th floor while many like me stayed in the canteen thinking it was something about the agitation over wages."
"Within minutes, we were enveloped in thick smoke. We then ran to the staircases but failed to go down for excessive heat," he continued.
He said they broke the windowpanes and hung long cloths to climb down. Many fell to the ground trying to get down this way.
Another survivor Mohammad Morsalin said soon after the fire began, the ninth and 10th floors became dark with smoke and it was extremely hot.
Sample-section worker Mujibor Rahman said all three emergency exits and exits for women were closed and a few could not get out through the three other staircases.
Worker Ruma and her elder sister Hamida said although they could get down using a staircase, many who were late to respond failed to escape.
She alleged that many were trapped as a security guard of the factory locked a collapsible gate.
Hundreds of people thronged the spot looking for their loved ones. Many were looking for their friends and relatives at nearby hospitals.
Prime Minister Sheikh Hasina sent her condolences to families of the deceased workers. She also asked the authorities concerned to investigate the incident and find out the reasons behind the catastrophe.
Meanwhile, the government formed a five-member committee led by an additional secretary to the home ministry to probe the incident following directives of the prime minister.
Bangladesh Garment Manufacturers and Exporters Association (BGMEA) formed another three-member committee to investigate the fire.
Home Minister Sahara Khatun who briefed reporters on the spot said the committee must submit its report in seven days.
She claimed 20 people died and 50 workers were injured.
BGMEA President Abdus Salam Murshedy told The Daily Star that families of each of the deceased workers would be given Tk 1 lakh as compensation from the BGMEA and Tk 1 lakh from Ha-Meem Group.
A press release from BGMEA mentioned that Dhaka deputy commissioner's office will give the victims' families Tk 10,000 each for burial purposes.
The home minister said each injured worker would get Tk 25,000 from BGMEA.
Ha-Meem Group Managing Director AK Azad, who is also president of Federation of Bangladesh Chambers of Commerce and Industry, told The Daily Star last night that the factory will open today.
However, there might be some problems in meeting buyer orders, he added.