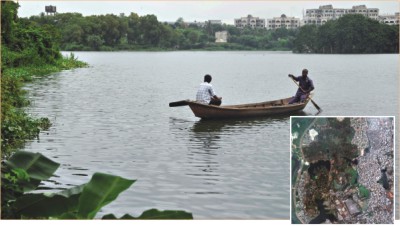 The proposed amusement park on one-third of the Dhaka Zoo includes this serene lake. The zoo area, which is metaphorically the lung of the capital and one of the greeneries that conserves biodiversity besides the caged animals, may fall prey to commercialisation. Inset, satellite view of the zoo. Photo: Anisur Rahman

The national zoo in the capital's Mirpur may fall victim to commercialisation, as the government is considering a private company's proposal to set up an amusement park on one-third of the zoo's land.
The zoo is intended to conserve wild animals and serve academic purposes, whereas an amusement park will deviate from these objectives and deprive people of recreational opportunity at a cheaper price, experts and officials concerned say.
A consortium of Malaysia-based Kopeda Group and local Maisha Group has submitted a proposal to the fisheries and livestock ministry for setting up the park similar to Fantasy Kingdom and Nandan Park located on the outskirts of the capital.
The company proposes modernising the Dhaka Zoo in exchange for 35-acre land and an 18-acre lake of the zoo where it intends to build a "world class" amusement park under public-private partnership.
The land the company sought has a number of animal enclosures, sheds and several hundred trees.
The government itself in the current fiscal year had proposed a Tk 114-crore project for developing the zoo.
In August, the livestock ministry sent a nine-member team led by its secretary on a 10-day visit to Malaysia and England at the expense of Kopeda-Maisha consortium to see models on the concept.
The ministry on September 22 authorised the company to conduct a survey in the zoo even before the team that went on the trip submitted its report.
Returning from the trip, most members of the team opposed the move to set up an amusement park in the zoo.
"An amusement park is not compatible with a zoo at all," said Md Akbar Ali, professor of animal husbandry at Bangladesh Agricultural University and a team member.
Prof Anwarul Islam of Dhaka University, another member of the team, said modernisation of the zoo is imperative to taking the zoo to world standard, but not by compromising its basic purpose.
"I never want a theme park within the zoo," he says, adding, "None of the examples where an amusement park has been combined with a zoo is good."
Maisha Group Chairman Aslamul Haq, however, said there are examples of amusement park and zoo seated together, and the project will proceed only if the government approves.
The company has proposed to spend over Tk 200 crore for developing the zoo and Tk 450 crore to set up the amusement park, he said.
"In case the government declines to allow it in the zoo, we'll seek a 20-acre area where the Central Poultry Farm [government poultry farm] is located nearby the zoo as an alternative," Haq, an Awami League lawmaker, said.
According to the proposal, the park will include a thrill park, hotel, food courts, water park with rides and hanging bridge, resort with cottage, convention centre, restaurants and gift shops.
There will be cable cars and trains over and around the zoo, and buses will travel inside to facilitate site seeing.
The company has also proposed renaming the Dhaka Zoo to Dhaka Zoo Amusement Park and run the park for 25 years.
"It's a move to commercialise a public institution to make profit," said Md Abdur Razzaque Mia, former director general (DG) of livestock service department.
Thousands of migratory birds that travel to the wetlands of the zoo every year will stop coming if an amusement park is set up, said Mia, also an executive member of environmentalist group Bangladesh Paribesh Andolon (Bapa).
ABM Shahid Ullah, curator in-charge of the zoo, said zoos are non-profit ventures all over the world. People will lose easy access to the zoo, as the entrance fee has been proposed at Tk 50, five times more than now.
According to a document obtained by The Daily Star, all zoo officials at a meeting last month made a resolution to oppose the government move.
The document quotes Sally R Walker, founder director of South Asian Zoo Association for Regional Cooperation, to have said that it would be very difficult for the association to give recognition to a zoo dominated by an amusement park.
Walker, who has recently visited Dhaka Zoo, also said it will lose the prospect of becoming a member of the World Association of Zoos and Aquariums.
To discuss the issue, the ministry held a meeting on October 7.
A high official present at the meeting said seven of the nine-member team in their reports argued against the amusement park.
The reports are now with Fisheries and Livestock Minister Abdul Latif Biswas for a decision, the official said wishing to remain unnamed.
The minister could not be reached for comments despite repeated attempts. Mosharraf Hossain, joint secretary of the ministry, said he could not comment until a ministerial decision is made.
Prof Akbar Ali said the Sunway Lagoon in Malaysia which they visited is actually a theme park, not a zoo.
Chessington World of Adventure, a theme park in the suburb of London, is no longer a zoo. It was converted into an amusement park in the 1980s.
During the team's visit to the London Zoo, its director Miranda Stevenson was surprised to learn that an amusement park will be set up in the Dhaka Zoo.
Currently, there are 2,061 animals of 151 species in it occupying 148 acres of land.