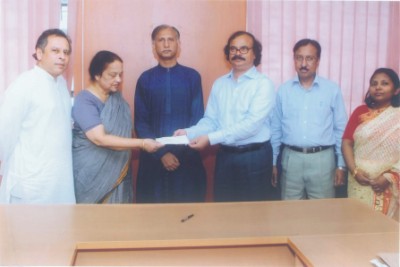 The Economics Department of Dhaka University has introduced an award and a gold medal for its best students after the name of Shah AMS Kibria, former finance minister who was killed in a grenade attack in Habiganj in 2005.
The department will give the 'Shah AMS Kibria Award' to the first class first holder in honours examination and the 'Shah AMS Kibria Gold Medal' to the first class first holder in the masters, said a press release yesterday.
Kibria's widow Asma Kibria yesterday donated Tk 7,00,000 to the university authorities for the awards.
Treasurer of Dhaka University Prof Dr Mizanur Rahman received the cheque.
Vice-Chancellor Prof Dr AAMS Arefin Siddique, Kibria's son Reza Kibria and acting registrar of the university Syed Rezaur Rahman were present on the occasion.
A brilliant student of Dhaka University in early fifties, Shah AMS Kibria is regarded as one of the most successful finance ministers of the country. His notable success was to keep the prices of essentials stable during his five-year tenure between 1996 and 2001.