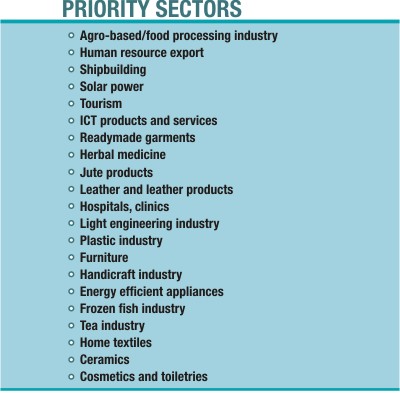 The new industrial policy has evoked mixed reactions from economists and business leaders.
Some hail the policy, which replaces the 2005 one after it got a go-ahead from the cabinet yesterday, for separately defining micro industries, while some grill the government for its stand on continuing with state-owned enterprises (SoEs).
However, Industries Minister Dilip Barua expressed his hope that the Industrial Policy 2010 would propel industrialisation and foster economic growth.
Terming it a 'comprehensive one,' the minister said, "It features long-term goals to foster the country's economic growth."
"The small and medium enterprises have been given special attention, as those could generate huge employment.”
"We have also selected a number of sectors as thrust sectors to give them required impetus to grow."
The minister has maintained his long-time position of not giving in to calls for divesting the SoEs -- a long demand by the private sector as well as development partners.
"Rather, we'll make SoEs competitive. Already many are making profit," Barua told The Daily Star yesterday.
Khondaker Golam Moazzem, senior research fellow at the Centre for Policy Dialogue, hailed the government for separately defining micro industries.
"Under old definitions, the micro industries could not fully match with any categories, which made it difficult to address the special needs and problems of the sector," he said.
On the point of making SoEs competititive, Moazzem laid emphasis on ensuring adequate alternative job opportunities for the SoE staff in case of any privatisation.
"Nongovernmental organisations should be given a responsibility in creating alternative job opportunities for such workforce," he added.
Moazzem also hailed the government move to include the more non-traditional segments in the list of thrust sectors.
"Going beyond the export-oriented industries, the new list has included a number of industries like shipbuilding, which has huge potential."
Moazzem welcomes government plans to set up separate economic zones for a number of highly potential industries like pharmaceuticals.
He however underlined the need to draw out a legal framework for establishing such economic zones.
"The funding for such zones should be channelled through public-private partnership," the CPD official suggested.
Former caretaker government adviser Dr ABM Mirza Azizul Islam questioned the government's plan to go ahead with SoEs.
"It's a fundamental question -- the government should not run commercial enterprises, no matter those are profit-making or not," he said, suggesting that the government could only limit its involvement in public utilities sectors.
The former finance adviser said, "Over the years the successive governments have dumped hundreds of crores for state-run factories."
He advised the government to go for golden handshake and arrange training facilities for the workers to be laid-off.
Waliur Rahman Bhuiyan, former president of Foreign Investors' Chamber of Commerce and Industry, echoed the former adviser's view on the government's stand on SoEs.
"The policy is encouraging SoEs, but it's not the government's job to run businesses. It should act as a regulator and facilitator."