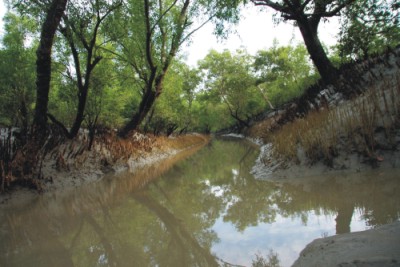 The rivers that drain into Bangladesh deposit more than 500 million tonnes of sediment each year. Many islands do disappear but new ones emerge. In fact, more land is gained than lost. In this context, the formation of a single island in the 1970s and its disappearance 30 or so years later are not remarkable and do not have any implications with respect to the supposedly catastrophic effects of carbon dioxide emissions.
Only a measurable trend in a reduction of the total land area of Bangladesh over a period of many years could be presented as evidence of such a global event. These data have not been presented possibly because the delta is actually growing - not shrinking. The rate of growth is estimated to be over 12 square miles per year. These data are not consistent with the idea that a rising sea level caused by carbon dioxide emissions is inundating Bangladesh.
In any event, the claim that the sea level is set to rise by one meter by the year 2050 is at odds with more recent press releases by the IPCC in which even the modest forecast of a rise of 59cm by the year 2100 has been withdrawn along with a slew of retractions after flaws in their science became widely publicized.