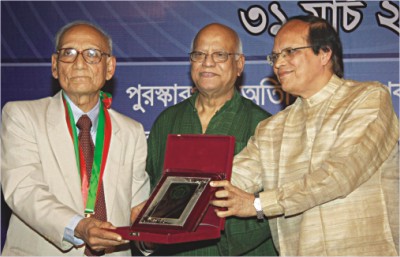 Renowned economist and researcher Prof Nurul Islam said yesterday an unusual hike in land prices, the culture of default loan with banks and massive tax evasion are widening the rich-poor gap in Bangladesh.
“These are good enough to aggravate inequality in Bangladesh,” said Islam, deputy chairman of the first planning commission of the country, after receiving Bangladesh Bank Award-2009 at a function at Sonargaon Hotel in Dhaka.
He also criticised a recent government move on establishing a banking division to oversee the financial sector, saying that it has diluted the supervision power of the central bank over the financial industry.
Finance Minister AMA Muhith addressed the function as chief guest. BB Governor Dr Atiur Rahman chaired the programme, also attended by former ministers, advisers, economists and chief executive officers of banks and financial institutions.
Islam focused on financial markets, the recent financial crisis, autonomy of the central bank, necessity of research economy, export, safety net measures and inequality.
He said rising inequality is a global phenomenon and the recent economic crisis has worsened it further.
The economist said the US has the highest inequality rate in the world and it is increasing tremendously in China.
In recent years, the disparity widened in Bangladesh, he said.
The recent price hike of land, what he said 'astronomical increase', has aggravated the inequality. The other two reasons he identified are: Systematic default of bank loans and massive tax evasion.
The economist said ensuring independence of the central bank is vital for a stable financial market. He said he was surprised to see the BB's supervision power getting diluted.
The finance ministry has recently formed a banking and finance division to oversee the activities in the sector.
Islam said international experience is rather exceptional.
In the banking industry's assets, advances and deposits, state-owned banks have almost 40 percent stake. Many private banks' directors are also politically leaning towards the government, he said.
So, the BB's supervision is already diluted, he added.
"I don't see future without a research economy. But it needs highly qualified and motivated staffs and, of course, compensation."
He also advised the BB to be cautious about capital flow although it remained immune to the recent global crisis.
Bangladesh economy is export dependent and Prof Islam said it might cause instability, particularly during the time of the current global shocks.
He suggested going for specialisation and diversification of exports.
The Bangladesh Bank award was launched in 1999. Prof Rehman Sobhan was awarded in the first year. Since then no award was given. Prof Nurul Islam was given the second one for his outstanding contribution to economy, education, research and independence of Bangladesh.
Islam held many important positions both at home and abroad.
After doing his PhD in economics from Harvard University in 1955, he worked as a professor of economics at Dhaka University, director of the Pakistan Institute of Development Economics (later Bangladesh Institute of Development Studies).
He was a fellow at St. Antony's College at Oxford University, assistant director general of the United Nations Food and Agricultural Organisation, and adviser at the International Food Policy Research Institute (IFPRI). He held several visiting academic appointments at Yale and Cambridge universities and both the London and the Netherlands School of Economics.
He was a member and later the chairman of the UN Committee of Development Planning Policy.
Islam's latest book -- Bangladesh: An Economist's Tale -- is a recollection of his memories in the early days of Bangladesh when he had an opportunity to formulate policies for the country.
He is now based in Washington DC and is an emeritus research fellow of IFPRI.