Big blow to the Sundarbans 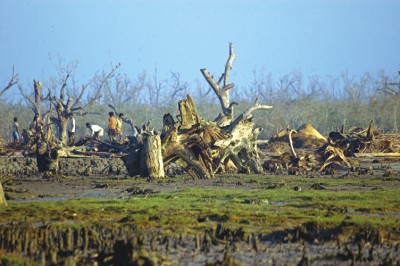 Large mangrove trees at Alor Kol in Dublarchar were uprooted as the Sundarbans took a massive blow of Sidr Thursday night. A quarter of the flora of the World Heritage Site was totally destroyed while a large number of its fauna perished.Photo: Syed Zakir Hossain

About one fourth of the four lakh plus hectares of forest area of the world heritage site, the Sundarbans, has been damaged by Cyclone Sidr, according to a primary assessment of the forest department.
According to the updated government estimate, the cyclone has affected 40 lakh individuals of 10 lakh families in 141 upazilas. Over three lakh houses have been completely destroyed and more than six lakh houses have been damaged.
The updated government estimate puts the death toll at 2,753, while the Armed Forces Division puts it at 3,113.
SUNDARBANS TAKES THE BLOW
The south-eastern part of the world's biggest single unit of mangrove forest sustained the main blow of the cyclone, saving human lives by slowing down the nature's wrath.
The forest department however has yet to get a total picture of the damage inflicted upon the wildlife of the forest that provides livelihood for more than two million people. So far the department has found only 23 carcasses of deer, along with two human bodies. Till now, the department has found no evidence of death of any Bengal Tiger.
"One fourth of the Sundarbans forest area has been damaged by the cyclone. Eight to ten percent of the forest has been damaged completely, and those trees will not regrow, while fifteen percent has been partly damaged, a part of which will regrow," said a forest official, requesting anonymity. He also said including the water bodies, the area of the Sundarbans is six lakh hectares.
The monetary value of the damage however has not been assessed yet, he added.
The forest department also has yet to start assessing the damage done to the trees in the affected areas outside the forest.
"But we have been given the impression from our field level staff that around 30 percent of those trees have been damaged," he added.
When contacted, Chief Forest Conservator AKM Shamsuddin told The Daily Star yesterday, "We have not completed our assessment yet. It will take time, because our men could not reach all the remote places."
"I have visited the Sundarbans twice after the cyclone. In my 29-year career, never before did I see the Sundarbans damaged like this," he added.
A source said, "The forest department has a facility for accommodating 1,100 of its personnel in the Sundarbans. The cyclone destroyed the accommodation for 1,000 of them. Therefore except for just 100, the remaining forest department staff and officials themselves are homeless."
The department also lost one of its workers to Sidr, who had taken shelter on a watchtower, which was brought down to the ground by the storm wind -- killing him, the source added.
Still, the scenario in the Sundarbans could have been worse if the size of the tidal wave was what it had been feared.
"Instead of a massive 20-feet surge, the tidal wave was smaller. That's why we believe the wildlife of the forest has largely escaped the wrath of the cyclone," said an official.
Another official cautioned against false impressions of the damage, as propagated by some forest officials. "Some forest officials are trying to say that a half of the forest has been damaged. I suspect, this is being said with an ill motive. If such a lie could be established as true, those people would simply strip the healthy part of the forest for their personal gains," he said.
Environmentalist and hydrologist Dr Ainun Nishat said, "It was initially thought that there would be a tidal surge of 15 to 20 feet height inside the Sundarbans. Since that did not happen, the forest will be able to recover itself soon."
DISEASE SCENARIO
Spread of diarrhoea and other water-borne diseases and acute water crisis are the two main problems chasing the survivors.
Safe drinking water has become a major concern because the cyclone has damaged the tube wells. Sweet water ponds have become saline, as the tidal surge that swept through the area came from the bay.
The tidal wave entered more than 35 kilometres into the mainland.
Director General (DG) of Health Services Dr Mohammad Shahjahan Biswas told The Daily Star, "Till now we have not received any information about uncontrolled outbreak of diarrhoea. We still have control over the matter. As of now, we are prepared to handle any such outbreak."
The Health Services Directorate has deployed 1,571 teams in the field, equipped with oral saline and other medicines.
DEATH TOLL
According to the Disaster Management Control Room (DMCR) in Dhaka, the death toll yesterday rose to 2,753 from Sunday's 2,300. It also said 2,259 people are missing, and 6,610 persons are injured.
According to the list, Barguna lost 979 persons, Bagerhat 711, Patuakhali 424, Pirojpur 309, Barisal 88, Madaripur 40, Jhalakathi 41, Bhola 34, Gopalganj 33, Satkhira 19, Shariatpur 17, Khulna 16, Faridpur 13, Narayanganj 7, Munshiganj 5, Chandpur 4, Dhaka 4, Moulavibazar 2, Laxmipur 2, and Chittagong, Jessore, Narshingdi and Narail -- 1 each.
Meanwhile, the death toll assessed by the Armed Forces Division (AFD) yesterday stood at 3,113. The AFD also puts the number of missing persons at 1,063.
DAMAGE ESTIMATE
The DMCR's updated information on total damage assessment says 141 upazilas and 1,119 unions have been affected.
The total number of affected families stands at 10.54 lakh, representing 40.83 lakh individuals.
Crops on 29,374 acres of land have been completely destroyed and on 8,55,525 acres have been damaged partially, according to the government assessment.
The number of completely destroyed houses stood at 3,00,511 yesterday and the number of partially damaged houses was 6,26,000. Besides, 3,84,000 trees have been damaged.
Some 792 educational institutions have been completely destroyed and 4,393 were partly damaged. Embankments of about 57 kilometres (km) of length have been damaged, and 58km of road has been destroyed completely while 87,948km of road has been partly damaged.
An official of the DMCR noted, "The picture will continue to evolve. We expect to get a complete picture of the damage within a week."
Meanwhile, the agriculture ministry has asked the Department of Agriculture Extension to submit an assessment report within 10 days on crop damage. The department started working on it on Sunday.