Solidarity against terror through music and poetry 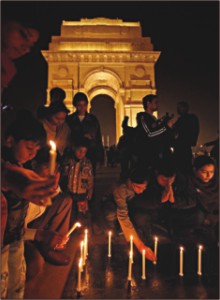 People light candles in memory of those who died in the 2008 terror attack on Mumbai, on the first anniversary of the attack, at the India Gate monument in New Delhi, India on November 26, 2009.

It was a powerful ode against terror.
The solemnity of the winter evening at the iconic India Gate here was heightened by several notches as playback singer Shreya Ghosal belted out the Rabindra Sangeet “Jodi tor daak shuney keu na aashey” and tennis ace Sania Mirza recited the English translation of the Nobel Laureate's poem “Chitto Jetha Bhoyshunno Uchcho Jetha Shir”.
The occasion was the observance of the first anniversary of the deadly Mumbai terror attacks which had left 166 people dead in November last year and it saw leading artistes, athletes, politicians, bureaucrats and some brave hearts who survived the incident, here last Sunday.
It was on this day that Indian security forces had ended the 60-hour dance of death unleashed by terrorists in the heart of the country's financial capital.
Organised by the Indian Home Ministry, the event saw prominent personalities from the different fields, including Bollywood superstar Shah Rukh Khan, actress-director Nandita Das, playback singer Kavita Krishnamurthy, lyricist Javed Akhtar, Olympic gold medal winner shooter Abhinav Bindra, Congress leader Rahul Gandhi and Home Minister Palaniappan Chidambaram, coming together to send out a strong message against terror and express solidarity with the victims of Mumbai terror attack.
For a change, it was the artistes and athletes who did the talking and the politicians and bureaucrats just listened.
Shah Rukh said how “devils in every religion created a new religion called terror-religion.”
He said it was important that this “terror-religion” is destroyed. “I'm often asked about my views on terrorism. There can be no two opinions on that.
Javed Akhtar recited his own poem written just three days back: “Koi dildaar ban key aaye toh dildaar hum bhi hain/ magar jo dushmani chhedi toh taiyaar hum bhi hain” (if one with a gracious heart approaches us, we will reciprocate but if one comes as an enemy, we too are ready to respond).
Singer Shilpa Rao rendered the song “Vaishnava jan…” immortalised by the voice of legendary Lata Mangeshkar while violinist L Subramaniam and singers Shankar Mahadevan, Shreya Ghosal and Kavita Krishnamurthy performed to spread the message of the resolve to stand up against terror.
Sania Mirza fell back to Tagore's poem to make her anti-terror statement while Abhinav Bindra said that as an athlete he has realised that winning against terror was the only option.
Conceptualised and directed by Bollywood director Feroz Abbas Khan and hosted by Nandita Das, the hour-long programme, held against the backdrop of an illuminated India Gate, came to an end with the rendition of the national anthem in which everyone present at the function lent their voice.
Vishnu Sakharam Zende, the announcer of Indian Railways who was on duty when the terrorists had struck at the railway station in Mumbai on November 26 night and saved the lives of many with his announcements over public address system, was also present at the function.
As the winter evening mist started gathering, the message of solidarity in the fight against terror warmed up the hearts of all those present at the event as also those who saw it beamed it live through television.