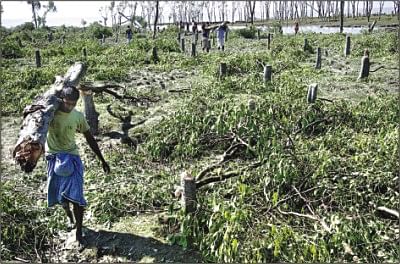 Around 5,000 trees along the coast in Sitakunda were randomly felled in the dead of night Sunday to make space for shipyard. The denudation by an influential quarter has also opened scope for the locals to go for odd profit. Photo: Zobaer Hossain Sikder

About 5,000 trees were razed in over half a kilometre of the forest belt at Sonachhari coast under Sitakunda upazila in Chittagong on Sunday night.
According to officials, the wholesale felling of the trees was carried out with instructions from some local influential people who would like to set up three to four ship breaking yards at the clear cut section of the forest.
On July 3 this year the influential quarter had cleared off over 15,000 Keora and Bain trees on 40 acres of land in the same coastal area.
The officials said some 300 hired workers, who most probably had arrived at the coast by boats to evade the eyes of law enforcers, were engaged to cut down the trees on some 20 acres of land since Sunday evening.
Sitakunda Police Station Officer-in-charge (OC) Nazrul Islam said they rushed to the spot immediately after being informed of the incident and arrested five persons -- Md Shahed, Md Joinal, Alambir, Rubel, and Dilip Chandra Dash from the spot.
"After the felling of the trees a good number of locals also joined the plunderers to collect logs and fire woods increasing the size of the crowd," he said.
"A few police men could do a very little against such a big crowd of over 1,000 people, when the plunder was backed by local influential people from both sides of the political divide," the OC said.
"There has been a dispute over the land between the people who want to set up the yards and the Department of Forest, and none from the forest department or anywhere else has yet lodged any complaint regarding the matter till now," the OC told The Daily Star last evening.
"However, we will try to proceed according to the law," he added.
Meanwhile, Divisional Forest Officer SM Khaleque Khan accused both district and police administrations of non-cooperation.
"There is a dispute between the forest department and some of the locals over 125 acres of land along Sitakunda coast, and the forest on the disputed land is being razed. If the district administration could help resolve the dispute, some stern measures could be taken to protect the green belt," said Khaleque.
"Responding to our request the State Minister for Environment and Forest Dr Hasan Mahmud from a meeting in Chittagong Circuit House directed police to rush to the spot and stop the felling on Sunday evening," said Khaleque adding, "But, by the time police reached the spot the damage had already been done."
"However, our men recovered some of the felled logs and we will surely file a case," he added.