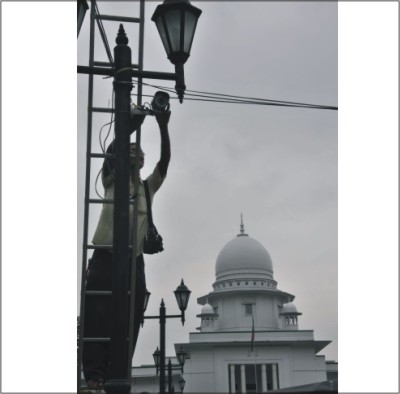 Security personnel fix a closed-circuit camera at the main gate of the High Court yesterday as part of blanket security measure ahead of the long-awaited verdict in the Bangabandhu Murder Case. Photo: Star

The government has deployed several hundred law enforcers on and around the Supreme Court premises to effect foolproof security for the historic judgment proceedings at the Appellate Division today.
Close-circuit cameras have been installed at different corners. From two monitoring rooms set up at the entrances to the apex court, security personnel are keeping a close watch on the movement of the people.
A five-member special bench that has heard for 29 days the appeals by five death-row convicts in Bangabandhu murder case is scheduled to start reading out the long-awaited judgment at 11:00am at Court No.1.
Some 600 law enforcers were already guarding the court area to ward off potential subversive acts.
Earlier on November 12, the bench comprising Justice Md Tafazzul Islam, Justice Md Abdul Aziz, Justice BK Das, Justice Md Muzammel Hossain and Justice SK Sinha announced the date for delivery of the judgment.
COUNSELS' EXPECTATIONS
Counsels on both sides were passing tense hours on the eve of the judgment pronouncement.
Attorney General Mahbubey Alam yesterday told The Daily Star he was feeling under stress ahead of the big day.
“This is a case dealing with the assassination of the father of the nation. For over three decades, people have waited for this day to come,” he said.
He urged everyone to remain alert so subversives cannot dare to create anarchy. He also asked all to report anything suspicious to the authorities concerned.
The chief state counsel for this case, Anisul Huq, told newsmen that the state has prayed to the bench to uphold the High Court verdict.
"I don't know what it will be," he added.
Supreme Court Bar Association President AFM Mesbahuddin said he hopes the verdict will help the nation make amends for putting up with an injustice of enormous proportions for so long.
Khan Saifur Rahman, the lawyer defending convicts Syed Farooq Rahman and Muhiuddin Ahmed, said the losing side can file a review petition with the SC against the verdict within 30 days since receipt of the judgment's certified copy.
Abdullah-al Mamun, the counsel for convicts Bazlul Huda and AKM Mohiuddin Ahmed, said the SC can pass four kinds of verdict in this case.
It can acquit the convicts by scrapping the High Court verdict, or commute their death sentences to life imprisonment, or uphold the HC verdict in its entirety or direct the authorities to arrange for re-trial of the case, he explained.
Lt Col (sacked) Syed Farooq Rahman, Lt Col (retd) Sultan Shahriar Rashid Khan, Lt Col (retd) Muhiuddin Ahmed, Lt Col (retd) AKM Mohiuddin Ahmed, and Major (retd) Bazlul Huda, who are behind bars, filed the appeals in October 2007 against their convictions and death sentences.
SECURITY
The government has put the law enforcement and intelligence agencies across the country on the alert to avert anything untoward before and after the final judgment.
Over 40,000 additional forces from the police and Rapid Action Battalion have been deployed, 200 check posts set up and 300 special teams assigned to patrol.
Around 11,000 law enforcers remain stationed in the capital alone.
Tight security measures have been in place around the Dhaka Central Jail where the five convicted killers of Bangabandhu are kept.
Check posts have been set up at all entrances to the capital, in the diplomatic enclave and at other strategic points. Anybody carrying bags will have to go through security checks.
Rab Director General Hasan Mahmud Khandaker said deployment of the elite crime-busters began on November 15.
“The verdict will be followed by a number of important events including Eid-ul Azha, Christmas, BDR mutiny trial and the New Year. So, the enhanced security measures will be in place for an extended period of time,” he told The Daily Star.